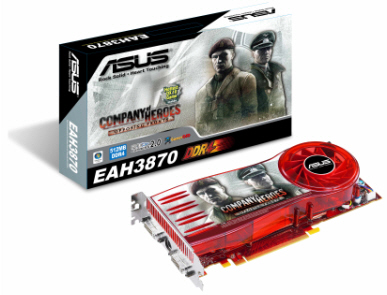 ASUS, producer of top quality graphic solutions has today introduced the world’s first overclocking version of the latest generation of AMD GPUs, the ATI Radeon HD 3800 chipset, with the ASUS EAH3800 TOP. Users will enjoy 8% and 4% improvement in gaming experiences respectively with the EAH3850 TOP/G/HTDI/256M and EAH3870 TOP/G/HTDI/512M. Along with the standard versions EAH3870/G/HTDI/512M and EAH3850/G/HTDI/256M, all the ASUS EAH3800 Series models will be upgraded soon to a second version that will come incorporated with the newest thermal solution — the Glaciator Fansink*. With its unique design, the Glaciator Fansink will keep the GPU temperature 20&#186C cooler than reference designed boards. On top of all this, the ASUS EAH3800 Series will also come bundled with the hottest DX10 game, Company of Heroes: Opposing Fronts.

World Exclusive Hottest DX10 Game Bundle – Company of Heroes: Opposing Fronts
Company of Heroes: Opposing Fronts is the next installment in the highest-rated strategy franchise that delivers an unprecedented level of realism and reveals a darker, more brutal war. With enhanced lighting effects, mission persistence, improved vehicle and soldier AI, enhanced physics and a dynamic weather system, this game will set new standards in visual realism for the RTS franchise. With the powerful performance of the ASUS EAH3800 Series, gamers will be able to enjoy the full graphical spectacle that the game can offer.

Exclusive ASUS GamerOSD for Versatile Graphics Usage
The ASUS EAH3800 Series also comes with the exclusive ASUS GamerOSD that unleashes the true power of ASUS’ VGA cards. This feature is able to deliver GPU overclocking from onscreen displays during gameplay – allowing users real-time performance upgrades when they require it. Additionally, it also provides users with the option to record live gaming action or live broadcasting over the Internet with ease.

Note:
* The ASUS EAH3850/G/HTDI/512M will come directly with the upgraded version
** Performance Configuration 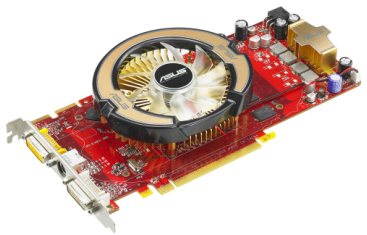