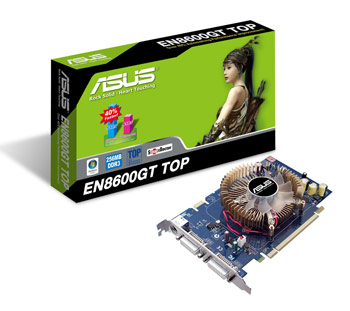 Unparalleled Overclocking with ASUS EN8600GT TOP/HTDP/256M
After launching the new OC Gear as the world’s first hardware based real-time overclocking device for graphics cards, ASUS, leading provider of high-performance graphics solutions, today introduced another top performance overclocking solution– the ASUS EN8600GT TOP/HTDP/256M. Featuring overclocking of the stream processors and equipped with upgraded -1 memory modules, users can expect over 40% improvement in gaming experiences. With the integrated new SmartDoctor, users will even have the option to overclock the Shader Clock for even better graphical performances. Additionally, its unique fansink design keeps the GPU temperature 13&#186C cooler than reference designed boards.

Unprecedented 40% Performance Upgrade
With the unified architecture of the GeForce 8 Series, NVIDIA utilizes stream processors to dynamically allocate processing power depending on the workload of the application. Therefore, performance and efficiency upgrades can be achieved by overclocking these stream processors. With the EN8600GT TOP, gamers can expect stream processor clock performance boosts from 1188MHz up to an incredible 1458MHz. Secondly, to provide gamers with the best overclocking experience, the EN8600GT TOP is upgraded with 1ns memory modules – harnessing the high speed capabilities of these super fast memory modules for the best overclocking capabilities for memory speeds. Such never-before-seen performance upgrades help raise the EN8600 GT TOP’s 3DMark06 score from 4185 to 5889 – an astonishing 40% improvement in speed to any other reference designed board*. Gamers will now feel the adrenaline rush of unprecedented gaming performance only with the ASUS EN8600GT TOP/HTDP/256M.

Brand New SmartDoctor for the Most Powerful Overclockability
ASUS garners yet another world’s first by providing an overclocking utility that is able to tweak the new Shader Clock on GPUs with SmartDoctor. With this application, users will be able to overclock the Shader Clock and Engine Clock independently for astonishing performance boosts without the hassles of rebooting or re-flashing their BIOS.

Exclusive ASUS GamerOSD for Versatile Graphics Usage
The ASUS EN8600GT TOP also comes with the exclusive ASUS GamerOSD that unleashes the true power of ASUS’ VGA cards. This feature is able to deliver GPU overclocking from onscreen displays during games — allowing users real-time performance upgrades when they require it. Additionally, it also provides users with the option to record live gaming action or live broadcasting over the Internet with ease.