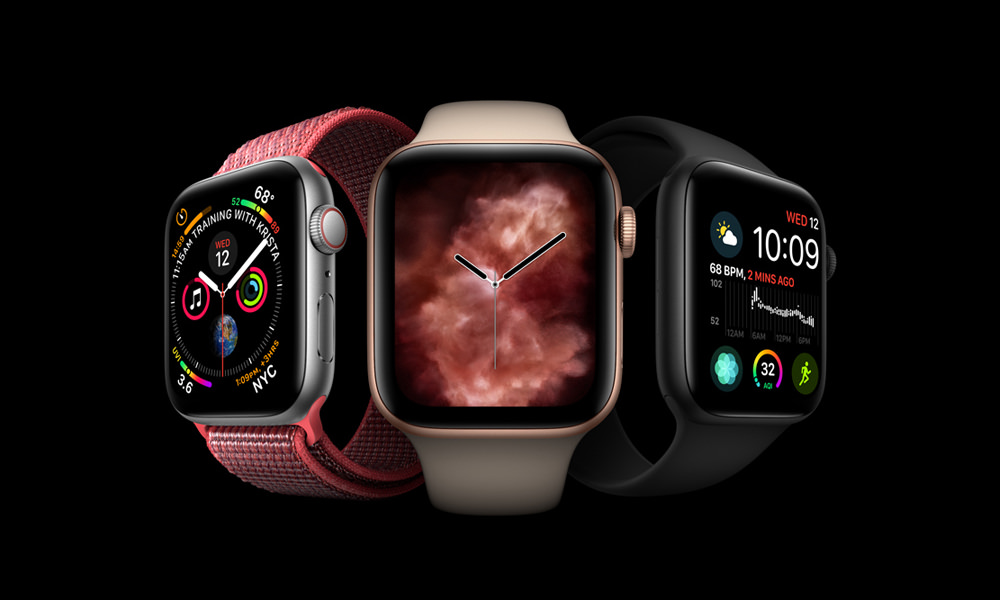 Apple announced Apple Watch Series 4, which features a stunning display with thinner borders and curved corners. It’s 2mm larger than it predecessors with over 30% more viewing area. Available in two sizes — 40mm (replaces 38mm) and 44mm (replaces 42mm) — both keep the same interchangeable Watch Bands, respectively, as before. The fourth-generation Apple Watch with watchOS 5 brings advanced activity and communications features, along with revolutionary health capabilities, including a new accelerometer and gyroscope, which are able to detect hard falls, and an electrical heart rate sensor that can take an electrocardiogram (ECG) using the new ECG app,1 which has been granted a De Novo classification by the FDA.

Design
Apple claims Watch Series 4 is more than an evolution — it represents a fundamental redesign and re-engineering of Apple Watch. It includes the next-generation S4 chip with a custom 64-bit dual-core processor, delivering twice the speed while maintaining the same all-day battery life.2  The speaker is 50 percent louder, optimized for phone calls, Siri and Walkie-Talkie, and the microphone has been relocated, to reduce echo for better sound quality.

The back of Apple Watch Series 4 is composed of a gorgeous black ceramic and sapphire crystal, allowing radio waves to easily pass through the front and back for better cellular service. The Digital Crown now includes haptic feedback, offering a more mechanical and responsive feel through the sensation of incremental clicks. 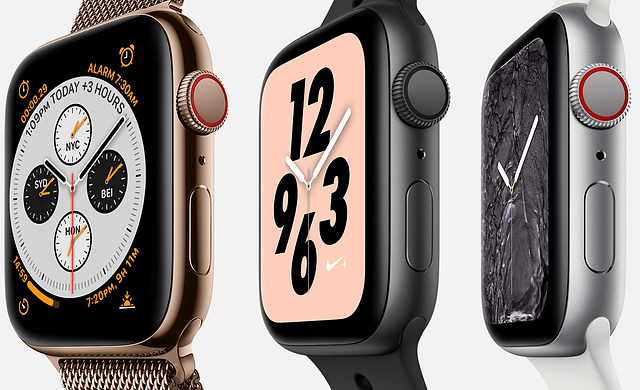 The user interface is optimized for the larger display, allowing for app icons and fonts that are bigger and easier to read, while complications have been beautifully enhanced to be more precise and informative. New watch faces take full advantage of the Series 4 display, from the endlessly customizable Infograph face, to the Breathe face, where the animation is timed around a deep breath. Additionally, a suite of motion faces, including Vapor, Liquid Metal, Fire and Water react uniquely with the curved edges of the case. 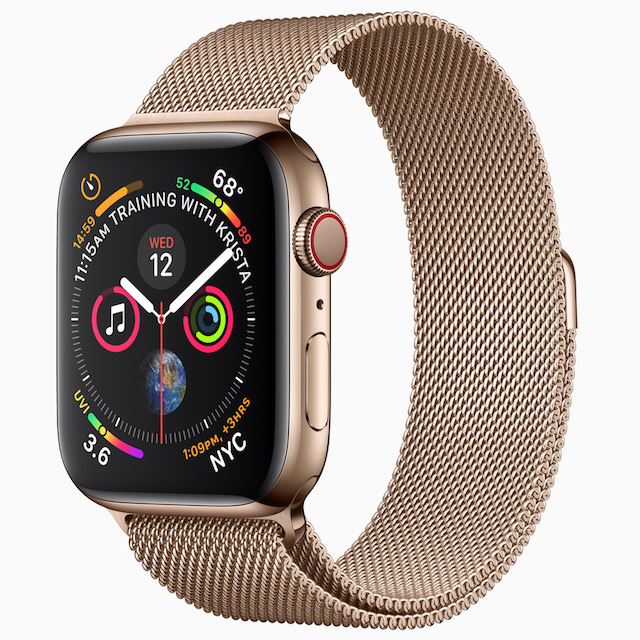 Health
Apple Watch Series 4 adds the ability to take an ECG reading right from the wrist using the new ECG app, which takes advantage of the electrodes built into the Digital Crown and new electrical heart rate sensor in the back crystal. With the app, users touch the Digital Crown and after 30 seconds, receive a heart rhythm classification. It can classify if the heart is beating in a normal pattern or whether there are signs of Atrial Fibrillation (AFib), a heart condition that could lead to major health complications. All recordings, their associated classifications and any noted symptoms are stored in the Health app in a PDF that can be shared with physicians.

Fall detection utilizes a next-generation accelerometer and gyroscope, which measures up to 32 g-forces, along with custom algorithms to identify when hard falls occur. By analyzing wrist trajectory and impact acceleration, Apple Watch sends the user an alert after a fall, which can be dismissed or used to initiate a call to emergency services. If Apple Watch senses immobility for 60 seconds after the notification, it will automatically call emergency services and send a message along with location to emergency contacts. 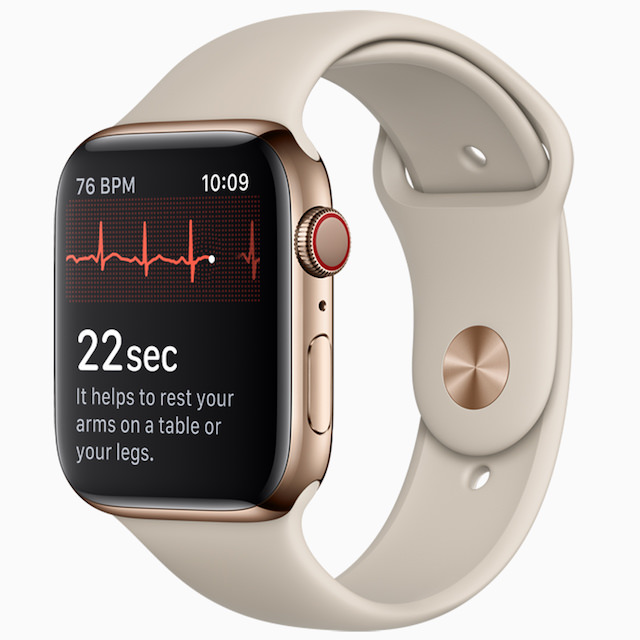 Staying Connected
Customers can reach their friends with just a tap of the wrist with Walkie-Talkie, a watch-to-watch connection that is an entirely new way to communicate around the world over Wi-Fi or cellular.4 The Siri watch face is more predictive and proactive, offering shortcuts and actionable content from favorite third-party apps. watchOS 5 also lets users listen to their favorite podcasts on the go with Apple Podcasts on Apple Watch, and stream any podcast in the catalog by using Siri. With Apple Watch Series 4, enriched complications offer a more detailed view of helpful third-party apps like Dexcom, which allows for continuous glucose monitoring, or Streaks, which shows daily progress on tasks. 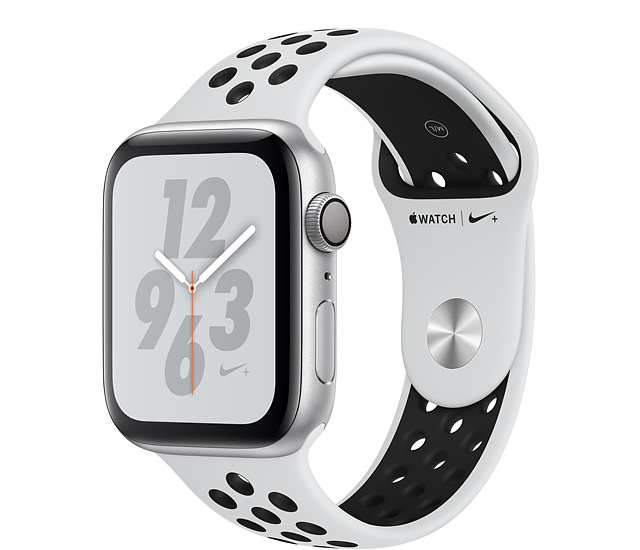 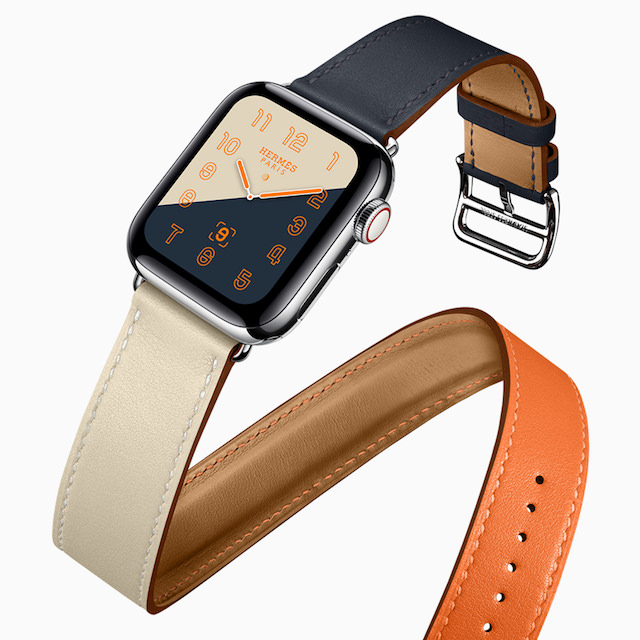 Apple Watch Hermès introduces an elegant assortment of color-blocked bands and exclusive watch faces that shift from one color to the other with the passage of the minute hand.