Apple and Starbucks today announced an exclusive partnership that lets customers wirelessly browse, search for, preview, buy and download music from the iTunes Wi-Fi Music Store at Starbucks onto their iPod touch, iPhone or PC or Mac running iTunes while at a participating location. When a customer enters a participating location, their device will automatically recognize the iTunes Wi-Fi Music Store using a high-speed Wi-Fi wireless network with no connection fee or hotspot login. Customers will be able to browse, search and freely preview millions of songs, including a new “Now Playing” service which displays the name of the song playing in the Starbucks store at that moment, then easily buy and download songs or albums directly to their device. Prices and selection on the iTunes Wi-Fi Music Store are the same as on the regular iTunes Store. The service will make its debut at more than 600 Starbucks company-operated locations in New York and Seattle on October 2. 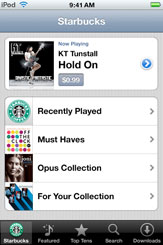 “Getting free access to the iTunes Wi-Fi Music Store and the ‘Now Playing’ service at Starbucks is a great way for customers to discover new music,” said Steve Jobs, Apple’s CEO. “Imagine walking into a participating Starbucks, hearing a great song, and being able to instantly download it onto your iPod or iPhone. We think this is very cool.”

“With this partnership, we’re bringing Apple’s leadership in digital music together with not only our retail footprint, but the unique Starbucks experience, to offer customers a world-class digital music experience,” said Howard Schultz, chairman, Starbucks Coffee Company. “Introducing this new service is a natural extension of our music strategy which only enhances the retail coffee experience for customers by helping them discover and acquire new music instantly.”

After its debut in New York and Seattle on October 2, the iTunes Wi-Fi Music Store will continue its national rollout to 350 Starbucks stores in the San Francisco Bay area on November 7; 500 stores in Los Angeles in early February 2008; 300 stores in Chicago in March 2008; and additional markets throughout the US later in 2008.

The iTunes Wi-Fi Music Store at Starbucks will run on the robust T-Mobile HotSpot Wi-Fi network which is available at participating Starbucks locations across the US.

With Apple’s legendary ease of use, pioneering features such as Cover Flow™, integrated podcasting support, iMix playlist sharing, seamless integration with iPod and iPhone, and the ability to turn previously purchased songs into completed albums at reduced prices, the iTunes Store is the best way for PC and Mac users to legally discover, purchase and download music and video online.