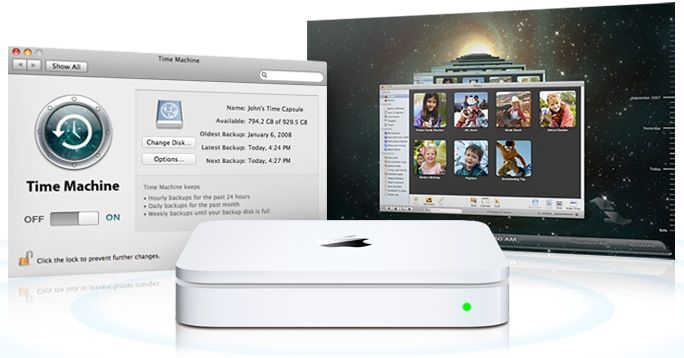 Apple announced that its popular AirPort Extreme 802.11n Wi-Fi Base Station and Time Capsule now feature simultaneous 2.4 GHz and 5 GHz dual-band networking for optimal performance, range and compatibility. An innovative Guest Network feature allows setting up a secondary network for friends and visitors with Internet-only access so you don’t have to hand out your WiFi password.

Time Capsule combines an 802.11n router and server-grade hard disk for automatic wireless back-up with Time Machine, and is immediately available in two models: a 500GB model for $299 and a 1TB model for $499.

The AirPort Extreme Base Station (below) is also available immediately for a suggested retail price of $179.*

Both products are available now at www.apple.com.

*AirPort Extreme and Time Capsule are based on an IEEE 802.11n draft specification. Actual performance will vary based on range, connection rate, site conditions, size of network and other factors.