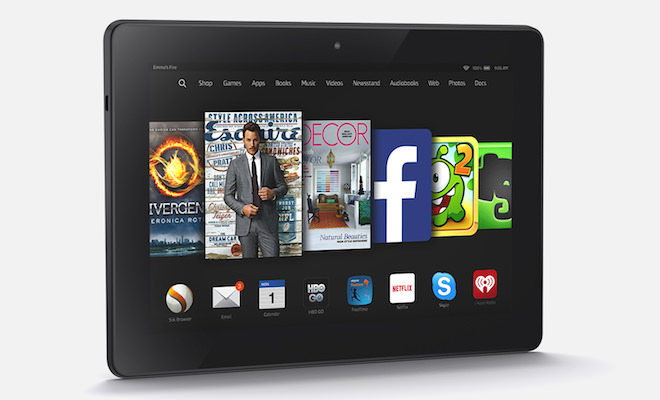 Amazon just announced an all-new Fire HDX 8.9 tablet starting at $379, which adds a more powerful processor for 70% faster graphics and Dolby Atmos for an improved headphone experience. Faster Wi-Fi with support for MIMO+HT80 has been added, but your router will need to be upgraded to experience better speeds. Finally, Fire OS 4 “Sangria” adds hundreds of new features and platform enhancements, including Firefly, ASAP, Smart Suspend, and other Amazon-exclusive features.

Interestingly, Amazon appears to have dropped Kindle from the its naming convention, while its older model keeps the moniker. The new, top-of-the-line, Fire HDX is the first tablet powered by the most advanced quad-core Snapdragon 805 processor, with each core running at up to 2.5 GHz. With the updated CPU and a 70% faster GPU than the previous generation Fire HDX, the all-new Fire HDX provides fast and fluid gaming and video.

With 30% more pixels than iPad’s Retina display, Amazon’s exclusive HDX 8.9-inch display combines exceptional pixel density (over 4 million pixels, 339 ppi) and perfect color accuracy (100% sRGB) resulting in the most lifelike images. The HDX display features Dynamic Light Control, which changes the white point of the display based on the ambient light of the surroundings in order to make the page of a Kindle book more closely resemble a piece of paper—this makes the best reading experience on a tablet even better on the new Fire HDX. Dynamic Light Control will be enabled starting later this year as part of a free, over-the-air software update.

Fire HDX is twice as loud as an iPad Air, delivering crisp, clear audio without distortion. The new Fire HDX is the first tablet with Dolby Atmos, which creates a new mobile headphone experience with multidimensional sound that flows above and around you. In a movie with Dolby Atmos, sound moves around you to match what you see on the screen—rain on a roof, airplanes taking off—so you’ll hear the sounds where they would be in real life.

Fire HDX is startlingly light, 20% lighter than iPad Air. Weighing just 13.2 ounces, Fire HDX’s frame is made of a single piece of machined magnesium with a blend of glass and nylon molded onto the unibody to create openings for the antennas and maximize signal strength without sacrificing weight or durability.

Even with a faster, more power-hungry processor, Fire HDX delivers incredible battery life—up to 12 hours of reading, surfing the web on Wi-Fi, watching videos, and listening to music—without adding weight or thickness to the design. The new Fire HDX also has weeks of standby battery life, so you don’t have to worry about waking up in the morning to find your tablet battery depleted because you forgot to plug it in. This standby battery life is made possible by combining power-efficient hardware components, low-level software improvements, and a new feature called Smart Suspend. Smart Suspend develops a device-specific profile for when the tablet is typically not in use and proactively turns wireless off and on to save power. Smart Suspend will still turn on Wi-Fi periodically to fetch new emails or app notifications, so when you pick up your tablet it’s ready to go and up to date.