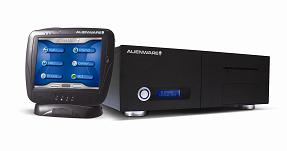 Since becoming a Microsoft media center launch partner in 2002, Alienware has developed an award-winning reputation for advancing digital home technology. Alienware’s line of DHS digital home systems have earned numerous awards and praise throughout the industry from publications such as Home Theater magazine, The New York Times, PC World, and CNET, which gave Alienware the “Next Big Thing” award during CES 2005. Home Theater magazine called Alienware’s DHS 5 system “a well-built, cleverly designed, and powerful PC that offers all of the options that both home theater and computing buffs would expect.”

The DHS 5 system delivers innovations like drop-and-play gaming through DISCover My Games technology and up to .8 terabytes of integrated storage capacity, as well as three TV tuners and support for HDTV. Featuring a blue-illuminated InfoPanel display on the front exterior, the fully-integrated, ultra-quiet DHS 5 gives users all the features of a DVD player, CD player, DVR, VCR, high-performance PC, and other entertainment devices in one system.