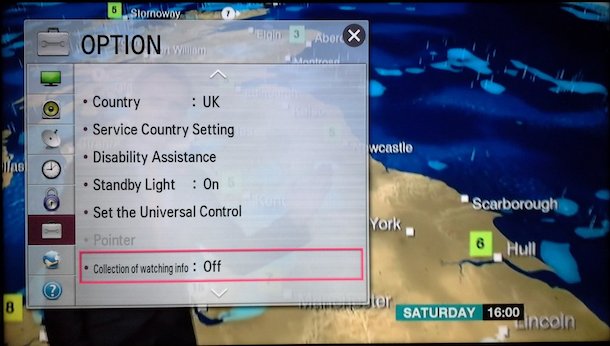 The blog DoctorBeet uncovered a disturbing problem with some LG Smart TVs. All viewing habits were being to sent to LG’s servers. More alarming, is that there is an obscure setting, which is enabled by default, called “Collection of watching info” that starts tracking as soon as the TV is on and connected to the Internet. But that’s not the whole story, DoctorBeet uncovered two more problems that will make your head spin.

The advice we have been given is that unfortunately as you accepted the Terms and Conditions on your TV, your concerns would be best directed to the retailer. We understand you feel you should have been made aware of these T’s and C’s at the point of sale, and for obvious reasons LG are unable to pass comment on their actions. – Tom, LG Electronics UK Helpdesk

After being caught red-handed, LG admitted that it has been collecting channel, TV platform and broadcast source data from some units, even when the feature was switched off, according to Engadget. LG also said the data collection was intended to provide better viewing recommendations to other LG Smart TV owners based on what they are watching. A firmware update is also in the works.

LG regrets any concerns these reports may have caused and will continue to strive to meet the expectations of all our customers and the public. We hope this update clears up any confusion.

With privacy on the minds of so many people, it is worrisome why LG needs to track this information in the first place. Perhaps LG is only using the data internally, but there could be big money in selling customers’ data.

As a LG Smart TV owner, all you can really do to protect yourself is to disconnect your TV from the Internet (Wi-Fi), which will disable the Smart TV features. Sophisticated techies might also block certain domains/ip addressees at the router level (e.g. ad.lgappstv.com) or use a packet sniffer to monitor where IP traffic is broadcast from your own home network.

Is LG the only one doing this?