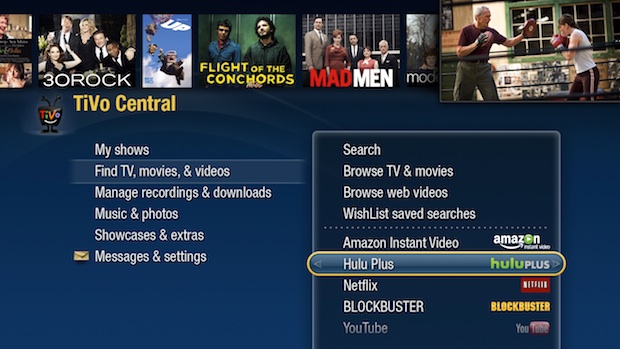 TiVo just announced Hulu Plus is available via $7.99/month extra subscription to TiVo subscribers with a retail TiVo Premiere DVR hooked up to broadband internet connection.

With the recent addition of hit shows from Comedy Central, and MTV including The Colbert Report and The Daily Show alongside popular hit shows from ABC, FOX and NBC like Modern Family, Grey’s Anatomy, Glee, Family Guy, The Office and 30 Rock, TiVo further extends its lead as the only one-box solution that integrates in one easy-to-use user interface the full complement of programming made available to users through their existing cable or fiber optic provider alongside the ever-increasing choice of broadband and on-demand offerings.

Hulu Plus joins other top broadband content providers such as Netflix, YouTube, Amazon Instant Video, and BLOCKBUSTER to offer TiVo Premiere subscribers the ultimate choice in entertainment programming, all easily accessed by TiVo’s elegant user interface and iconic peanut remote control. Hulu Plus programs are easy to find by title or by browsing Hulu Plus’s network listings and genres.

In addition to the top hits of today, Hulu Plus offers one of the largest catalogs of television content on a streaming platform to subscribers in the U.S., including full series runs and numerous back seasons of dozens of classic shows like The X-Files, Law and Order: SVU, Arrested Development, Saturday Night Live, Miami Vice, Ugly Betty, Quantum Leap, Buffy the Vampire Slayer, Angel, Roswell and Ally McBeal.