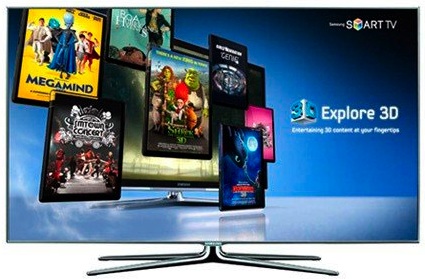 Samsung today announced a new way for consumers to access 3D content for their 3D LED and 3D Plasma TVs with its new Explore 3D app included in their new HDTV models. The free service (requires a broadband Internet connection) is accessible from Samsung's SmartHub interface and will offer access to dozens of pieces of free 3D content — all in streaming high definition — including trailers from DreamWorks Animation and other studios, music videos, educational content and full-length TV shows from Wealth TV.

Later this year, Explore 3D will also offer access to paid content available in streaming 3D — including feature films and shorts, plus full-length 3D documentaries. The service is available now on all 2010 and 2011 LED Smart 3D TVs and Plasma Smart 3D TVs. Users simply sign up for a new account via any PC.

The Explore 3D application is powered by Rovi Corporation and includes its cloud-based metadata and RoxioNow platform. Rovi currently powers entertainment services for a range of companies, including digital storefronts from Blockbuster and Sears that are also available on Samsung TVs. In addition to supporting Explore 3D, Rovi licenses its interactive program guide, Advertising Services and DivX technologies for use on Samsung devices.

Samsung' utilizes 3D Active technology to deliver a no-compromise 3D experience. Unlike other approaches to 3D, Active 3D Technology delivers up to double the resolution for an immersive, Full HD image (1080p picture for each eye), a wider viewing angle and no black lines interfering with the picture.

Recently, Samsung announced a new promotion which includes two pairs of its Active 3D glasses with qualified 2011 LED and Plasma TVs purchased from authorized dealers, as well as a price reduction across its entire line of 3D glasses, allowing a family of four to enjoy 3D for under $100.