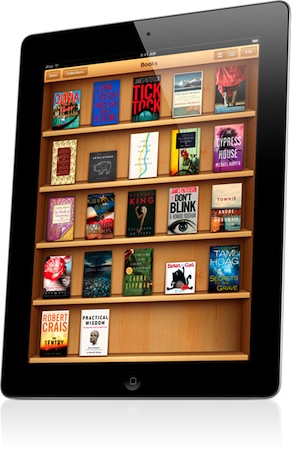 Apple today announced that Random House, Inc., the largest trade book publisher in the US, has made its full catalog of 17,000 ebooks available on Apple's iBookstore, including bestsellers by Stieg Larsson, John Grisham, Dan Brown, Danielle Steel, Laura Hillenbrand, Cormac McCarthy, Lee Child and many more of the world's preeminent authors. Starting today, customers can pre-order upcoming releases from Random House including Lisa Gardner's "Love You More," Suze Orman's "The Money Class" and Jean Auel's "The Land of Painted Caves." With the addition of Random House, the iBookstore now offers ebooks from all six major trade publishers and thousands of independent publishers.

"We are delighted that Apple's iBookstore now will be carrying Random House's US ebooks for the first time," said Markus Dohle, Random House's Chairman and CEO. "And we look forward to bringing our 17,000 ebooks to Apple customers."

"We're thrilled to offer Random House on the iBookstore," said Eddy Cue, Apple's vice president of Internet Services. "iBookstore customers have already downloaded more than 100 million books in less than one year, and we think they'll love being able to choose from Random House's incredible selection of titles to enjoy on their iPad, iPhone and iPod touch."

iBookstore customers can choose from a wide selection of illustrated and video-enhanced books that look incredible on iPad, including Jay-Z's memoir "Decoded" and Bing West's "The Wrong War"; bestselling children's series such as Magic Tree House and Junie B. Jones; and cookbooks by Martha Stewart, Rachael Ray, and the Barefoot Contessa, Ina Garten. Random House, Inc. comprises more than 80 adult and children's US publishing imprints including Alfred A. Knopf, Doubleday, Crown, Pantheon Books, Vintage, Ballantine and Bantam.