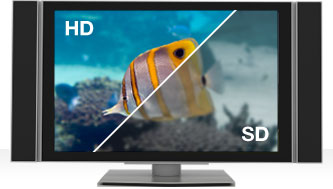 Magid Study Reveals That Cable & Satellite Operators Are Missing Out On At Least 14 Million US Households Who Have HDTV Sets, But No HDTV Programming

A recent study of high-definition television ownership and viewing behaviors by Frank N. Magid Associates reveals the continuing disparity between HDTV set ownership and service adoption, and the major opportunities for operators to grow their HDTV ownership base and programming customers through improved communication of the benefits of HDTV service.

As this group of HDTV owners who are unaware of their set functionality suggests, consumers continue to be confused about their television reception and display capabilities. In addition, consumers remain uninformed about the offerings and value of HDTV programming. Those who describe their home as owning at least one HDTV set and subscribing to HD service remains limited, at 66 percent of HDTV set owners — nearly the same level of service subscription at 64 percent in 2008.

In terms of the size of the opportunity for operators, this translates to 14 million households with HDTV sets, but without programming service.

“The disparity between HDTV ownership and service adoption reveals challenges for programmers,” said Maryann Baldwin, Vice President of Magid Media Futures™. “Some consumers were driven to purchase HDTVs under the erroneous assumption that they would be prepared for the digital transition – and didn’t buy an HDTV set for the value of the programming in the first place.”

“On the other hand, this reveals a major opportunity to increase programming subscriptions and to close the gap between set buyers and service adopters though improved marketing and education,” said Jill Rosengard Hill, Senior Vice President. “Since marketing buzz has waned after the digital transition, HD is fading as a top-of-mind feature for some consumers.”

The need for improved marketing is clearly demonstrated by the fact that 13 percent of consumers indicate that they have not seen or heard anything about high-definition television, the highest percentage since this survey was initiated in 2002.

However, service providers have not demonstrated the value of HDTV service to the one third of “sideliners” – those who own an HDTV set but don’t subscribe to HDTV service. Forty-two percent of sideliners admit that “options are not worth the fees,” and one third cite cost and affordability as the primary reasons for not buying service. Consumers are increasingly satisfied with HDTV sets simply for the design, with 32 percent saying they “like the way the set looks; don’t need HD programming” compared to 25 percent in 2008.

When asked if there’s any chance they may eventually arrange for HD programming service, 16 percent of these most recent HDTV set buyers say they may sign up for satellite HD in the next six months, while 22 percent may sign up for cable HD, suggesting that service providers have the opportunity to pick up another 4.5 percent of TV households as HD programming customers.

This study indicates that extensive opportunities exist for significant growth in HD programming uptake, but many consumers are still not recognizing the value of HDTV offerings. Besides improved marketing and price decreases, new offerings such as HD VOD, 3D programming and online connectivity will drive set and programming adoption.

About this study & new topics for 2009:
The online survey was conducted in October 2009 using a nationally representative sample of 1,373 adults age 21 years or more who own an HDTV set.

About Frank N. Magid Associates, Inc.
Founded in 1957, Frank N. Magid Associates provides research-driven, strategic media counsel on the evolving consumer mindset for clients in 37 countries. The company helps businesses that are struggling to make sense of a constantly evolving marketplace connect with an increasingly elusive, splintered consumer who is seemingly hidden behind an expansive array of technologies. Magid not only provides businesses with an understanding of the attitudes, opinions and actions of today’s technology-saturated consumers, but also offers research-driven strategic advice on how to successfully brand, advertise, market and design their products and services.