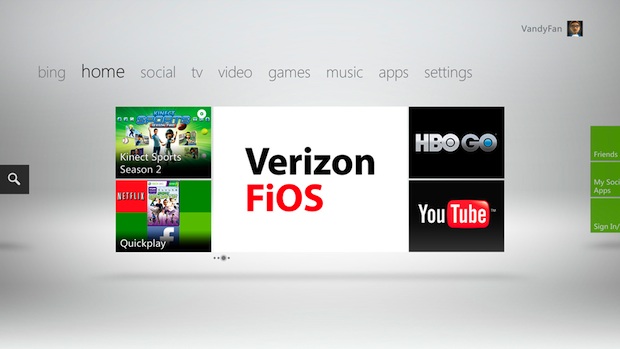 Microsoft greatly expanded their internet TV streaming service through Xbox LIVE on Xbox 360 game consoles with nearly 40 new entertainment providers, including Verizon FiOS, Comcast, BBC, Rogers and HBO Go. Microsoft hopes to transform how you watch TV with access to wide array of on-demand movies, TV shows, music and apps which can all be voice and air-gesture controlled with Xbox Kinect.

With Kinect for Xbox 360, there are no remotes, no buttons, no worries. Gone are the days of managing a handful of remote controls, trying to remember what movies are available from what service, and hunting back and forth across television inputs. Using voice search with Bing on Xbox, easily look across a variety of branded services and play the programming you want without ever raising a finger. Having trouble finding last night's episode of "The Office"? It's now only a voice command away. Just say "Xbox, Bing, 'The Office,' " and Xbox finds it.

Xbox 360 brings all your entertainment, friends and family together in one place. Now, easily switch from playing your favorite game with a friend out of state or even across the world to watching your favorite TV show with your family members on the same couch, all through Xbox LIVE. Effortlessly switch from games to music to live TV and more, simply by telling your Xbox what you want to experience.

Xbox 360 is the first console to offer access to popular TV properties, including BBC, Channel 4, Channel 5 and LOVEFiLM in the U.K.; Antena 3, RTVE and Telefónica in Spain; Televisa in Mexico; and Bravo, Comcast's Xfinity On Demand service, Crackle, EPIX, Syfy, TMZ, "The Today Show," UFC, Verizon FiOS and HBO GO in the United States.

These just announced TV and video providers join Microsoft's existing lineup of TV and video entertainment partners already on Xbox 360 — AT&T, Netflix and Hulu Plus in the U.S., TELUS in Canada, BSkyB in the U.K., Canal+ in France, Vodafone Portugal, VimpelCom in Russia, and FOXTEL in Australia.

With live and on-demand content from ESPN in the U.S., UFC in the U.S. and Canada, and GolTV in Spain and Maple Leaf Sports & Entertainment/Real Sports in Canada, Xbox 360 completely changes how sports fans experience and interact with their favorite pastimes. The all-new ESPN on Xbox LIVE features thousands of live events and video highlights with enhanced personalization features, split-screen viewing and an updated interface content guide that makes it easy for fans to find the highlights from the teams and sports they care most about. UFC on Xbox LIVE gives fans access to live pre-event videos, a catalog of on-demand video, an Interactive Fight Card and pay-per-view events in stunning HD all together in one place.

In addition, web video, news and music are also coming to Xbox 360, including AlloCine, Dailymotion, iHeartRadio, MSN with MSNBC.com, "The Today Show," TMZ, VEVO and YouTube.

With social features built-in users can share recommendations, and show the Xbox LIVE community what games they're playing, watching and listening to directly to their Facebook wall from Xbox LIVE.

Price and Availability
Now for the catch. All of this content is not free. In the case of Comcast and HBO you have to already be a cable subscriber and pay for HBO, so essentially you swap your cable box for Xbox to access the same shows through a cooler interface. In other cases Xbox LIVE points must be pre-purchased to pay for content.