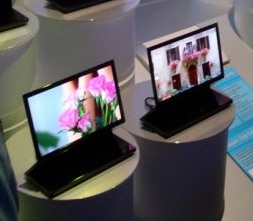 You might think that "so thin, the remote control is actually thicker" is hyperbole. Not so. Sony was showing production models of its new OLED (Organic Light Emitting Diode) HDTV sets. The monitor is actually about the thickness (or thinness, if that's a word) of three credit cards. In the case of Sony's OLED technology, the picture has a contrast ratio of 1,000,000:1 and a viewing angle of almost 180 degrees. On top of all that, the picture quality is extraordinary. It should be. An 11" model will set you back $2,499 retail. When will we start to see reasonably priced, reasonably sized OLED monitors at retail? Sony's official word is, "sometime in the future."

Sony also showed a group of Bravia HDTVs that featured WirelessHD capability. In Sony's case, you can have the monitor located up to 200' away from the set's electronics and transmitter box. It's a game changer. We're used to seeing HDTV screens mounted on walls with no wires showing, but as you know, someone had to install the screen and hide the wires. These new sets just hang on the wall and the electronics can be put in a closet or almost anywhere in the room. Look Mom, no wires! Dads everywhere are getting out their checkbooks. WirelessHD is a big deal and all of the big manufacturers (LG, Samsung, etc.) know it and have similar offerings.

Everyone was also showing their version of OTT (over the top) IP-video-enabled TVs. These could be television sets with Ethernet connectors or wireless connectivity built-in, like the LG and Pioneer sets or, with a complete operating system and unique user interface like Sony's Bravia Internet enabled sets. Sony has a content delivery schema and the system features video from major networks and even Media 3.0 with Shelly Palmer. Yep, we signed a distribution deal for our daily videos with Sony too.

The biggest problem with all of these OTT Internet plays is interoperability. There simply isn't any. Video formats, advertising schemas, methodology and work flows all vary wildly from manufacturer to manufacturer. So, in practice, everything you are seeing is really only a specific solution under a specific set of circumstances. In other words, everyone is trying to sell their own separate ecosystem — this is truly unfortunate.

Perhaps the key take-away for CES this year is the overwhelming need for a set of standards for advanced media and video distribution. The CE industry needs to offer content distributors and consumers a comprehensive, interoperable set of technology solutions. Nobody is really going to be able to use this stuff at scale unless it all works together.

During CES week, the HD DVD v. BluRay war was called in favor of BluRay. This may be premature or it may be right on the money — in truth, it would be great to have a single optical solution for HD storage. But, while everyone at the show was taking sides and talking trash, some people might have missed the other big story at CES — solid state memory.

You know your jump drive (the little USB thingy you have on your key chain)? It could be up to 8GB, but it's probably a smaller model. Well, several manufacturers were showing prototypes of jump drive and SSD (Solid State Disc) technologies up to 832GB. Yes, you read it right, almost a Terabyte of data could be hanging on your keychain within a very few months.

What will that mean to you? Well a standard DVD holds one movie and some additional material in 4.7GB and BluRay disc holds about four times as much. But, if you compress a movie to about 2GB where it still looks good, you can imagine a world where any given teenager could be walking around with over 400 full length, HD feature films, 1,200 standard definition films, 2,000 hours of television or 250,000 songs on their iPod or hanging on a keychain or lanyard. Current technology would not allow a consumer to transfer all of that data very easily (and what exactly would you be transferring it to anyway) so thinking about a world where your jump drive, or whatever it will be called, contains $5,000 worth of content, you can easily foresee a business in wearable art, jewelry or some other accoutrement keeps your data close to you and makes it hard to lose.

IBM was showing a proprietary USB key (again it doesn't work with anything that anyone else makes) that can download a 1.9GB HD feature film in under 60 seconds. Solid state memory uses very little electricity compared to traditional hard discs, they also have no moving parts to break. This kind of massive, passive storage capacity will effect a true sociological change. Imagine walking around with that amount of data in a wireless P2P environment, it would truly change the way we do life. 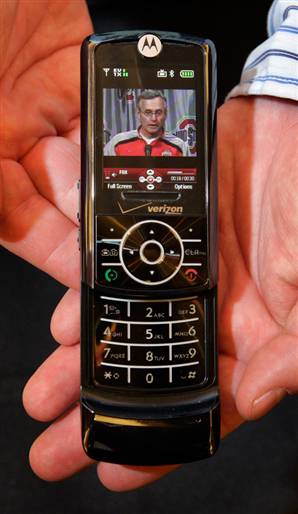 Perhaps my favorite thing at the show was a new phone from Motorola called the Z-10. It has a complete video production and post-production studio built in. You can shoot stills or video at 3.2 megapixel resolution, edit (including transitions, music, narration, graphics, etc.) and then distribute (using the very well written Shozu software) your finished video to your YouTube account or to all of your accounts MySpace Video, Veoh, Vimeo, Revver, Flicker, etc. by just hitting one button. We've been talking about this kind of video production device for years, but to actually hold a working model in your hand is amazing. And, you can even use it to make a call.