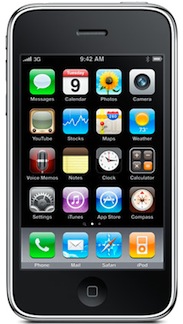 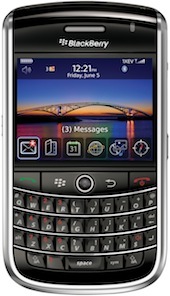 On the other hand, a BlackBerry Curve (or Tour) on Verizon Wireless is not only an excellent phone, it is a serviceable speakerphone (For all practical purposes, the iPhone cannot be used as a speakerphone.)

If you are looking for a phone, buy a BlackBerry.

Multi-media Functionality
A 32GB iPhone 3GS, may not be much of a phone, but it is an extraordinary multi-media device. It has a serviceable camera, a remarkable screen, a killer user interface and, as you already know from Apple's commercials, over 100,000 available apps. If you can think of it, there's an app for it, and the list is growing daily. This sounds like a unique selling principle of the device. And, in many ways it is. However, in practice, there are only a certain number of apps that apply to you and, in practice, the functions are available on both devices.

Web
iPhone wins — no contest! However, the Google apps for BlackBerry can make web browsing on a BlackBerry good enough for occasional use.

Email
The iPhone integrates with Mac Mail quite well. It has the ability to receive POP3 and IMAP email from your servers and also is somewhat compatible with Microsoft Exchange. The email client is sub-optimal (I'm being kind). If you do a lot of email, you will hate the iPhone.

The BlackBerry has a flawless email client. Whether you use Exchange or POP3 or IMAP, it is push and it is a pleasure. You can search the device quickly and find everything related to everything. With regard to email and txt, the BlackBerry is all business and it just works.

HTML email is the wildcard, Apple wins because of its wonderful screen and user interface, but BlackBerry software does display HTML email and, although it is not an enjoyable experience, the emails are readable.

What to Buy
If you really want an iPhone, go ahead and buy one. You will also absolutely need to purchase an external battery like the Mophie Juice Pack (I like the juice pack because it is more powerful than the Mophie Juice Pack Air and I'm not purchasing an external battery for its aesthetics.) If you buy an iPhone, there is a very good chance you are also going to need to purchase a cell phone and get a contract from Verizon. I don't know about you, but I like to make a phone call or two on my phone and, as I said, this is simply not possible with an iPhone. (Jobsian supplicants: Before you burn me in effigy, understand that I am one of you. I own a 32GB iPhone 3GS. I love it and worship it. I love Steve. In fact, if you were to visit my home, it looks like Steve Jobs threw up in here. I literally have every Apple product ever made. But, you must admit this unspoken truth – the iPhone sucks as a phone.)

If you really need to do email, txt and have friends who use BBM (BlackBerry Messenger a free, instant BlackBerry-only chat client) and you don't feel like having two phone company contracts to pay each month, BlackBerry is the way to go. However, if you really want all the features of the iPhone, including access to the App store, you are going to want to also purchase an iPod Touch You can probably get away with the 8GB model for $199. Apple offers models up to 64GB for $399, but unless you love movies on the go, and want to store dozens of them on your device, you don't need to spend the extra money. The Touch doesn't have a camera, but it is a great little WiFi enabled web browser, app and gaming platform. Carrying both a BlackBerry and a Touch is a good compromise.

If you want only one device — you can't have all of the features available in our mobile, 3G world.

What do I carry? I have a 32GB iPhone 3GS and I have a Verizon Motorola Droid, which has replaced my BlackBerry Curve for the moment. Is the Droid an iPhone killer or a BlackBerry killer? That's for the next column.