The Grokster vs. MGM last month shouldn’t have come as a big surprise to anyone last month even though lots of us clutched that faint ray of hope the Sony VCR ruling would help shield the industry. The surprise was the nine-zip decision. Granted most of the sitting judges are older than dirt. But anyone in the industry has to admit we’ve been saying “no no” with a smirk and a wink way too long. Of course the decision means we’re going to have to do without those great ads. You know – Apple’s “Rip. Mix. Burn” and Microsoft’s “Swap Pictures, Music, Video and More.”

The MPAA was smart because they picked two targets they knew they could eventually defeat – Grokster and StreamCast. They weren’t even subtle. They listed copyrighted music links and offered guidance. They weren’t guilty they noted because they only listed the music — neither was the old Napster. The problem of trying to piggyback so much on the earlier Sony ruling is that the Justices gave some strong indication that they “might be” convinced to overturn the ruling or modify it significantly. If that happens we will be so screwed!

Everyone knows that if you open the door even a crack to the barbarians they will gather in mass to clean you out of house and home. Lots of lawyers (see the parallel here?) saw the similarity for a lifetime of riches in the Grokster decision. They won’t care what side of the aisle they are on because the written comments from the Justices left a lot of wiggle room and gray areas that are subject to interpretation. Depending upon the chair you sit in you could interpret — promoting its use to infringe copyright — any way you want.

If you want to imagine what all the government intervention could do to the professional and consumer video industry look at the pharmaceutical/healthcare industry — it’s your benchmark. There are more lawyers than scientists and there is an ambulance chaser behind every tree. Still their liability insurance costs are out-of-sight!

But we don’t agree with a lot of the doomsayers and lawyers who see themselves being paid to sit in on product development and marketing communications meetings. Stressing that you support copyright protection is easy to do. File transfer and swapping technology that emphasizes legal content sharing can be clearly and concisely stated. Policing your P2P sites for illegal postings isn’t that difficult. A professional approach and common logic don’t need a review of ethics by a lawyer.

Guns Don’t Kill People
Suing every grandmother and impoverished kid in sight, MPAA and RIAA have continuously claimed that their sales and profits are off because we’re all stealing from them. But they show quarter to quarter solid profits.

The two don’t go hand-in-hand especially when you see DVD sales and rentals up significantly and music download purchases tripling. And we don’t understand the benefits of suing your customers. Reminds us of a t-shirt we saw “The Beatings Will Continue Until Morale Improves.”

On the other hand, suing technology products into submission (or oblivion) won’t work either. Technology doesn’t do bad things, people do bad things.

Digital content is here to stay and file-sharing is a way of life – legal or illegal. Solutions Research Group recently studied people’s attitudes toward file sharing and surprise, folks were pretty evenly divided (Figure 1). Young people felt it should be allowed as did MP3 player owners.

While most had no problem with paying a reasonable fee for their downloads there is a growing concern over the security of the personal identification and payment data that is provided.

Given that it is globally impossible for the MPAA and RIAA to roll back P2P exchanges so they can return to the “good old days,” We agree with a recent OECD (Organization for Economic Co-operation and Development) report. They explored the changes and outlined the social, cultural and economic potential of digital distribution. There are ways to provide sufficient rights protection and secure payments. It will take time and effort but it certainly beats suing you into submission.

Some people will always expect something for nothing. But most people have no problem with paying what is fair. And when they buy a CD or DVD they should have a right to make a backup copy, let the kids play the backup until they ruin it and keep the master on the shelf.

We know the content owners won’t agree but let’s say we buy the disc and make two copies – one for home and one for the cabin in the mountains. Or a good movie copy at home and one in the SUV to shut the rugrats up. Is that illegal? No, think of it as a software license where the software is on two different systems and can be used as long as both systems aren’t used simultaneously. Maybe they will have to reexamine their business models and the world we live in today.

So who’s going to make the money at the end of the day? Hollywood/content owners? The creative folks? Hardware folks? Software people? Pipe owners?

As Dustin Hoffman was told in The Graduate, remember one word — Middleware!

It’s not going to come fast and it isn’t going to be easy. Folks across the spectrum will make money on digital content (except consumers of course). But the real heroes (and folks who will have a great long-term revenue stream) in the future will be those who develop the DRM (digital rights management) and DAM (digital asset management) products that serve the needs of content owners, content delivery and content user folks!

Faith Popcorn, noted futurist, coined the phrase cocooning several years ago of the growing desire of people to wrap themselves in their homes in the evening and be family focused. People eagerly adopted the movie purchase and rental model because it was inexpensive, convenient and fit into their cocoon lifestyle.

Sitting at home in your favorite chair, socks/shoes off, eating greasy popcorn your way with a soda, beer or other drink is plain relaxing. And you get to view all of the outtakes, special segments, actor/director comments you never see at the theater. Look at the growth of home theaters. It tells you something!

Or you can get dressed and fight with the kids, drive to the theater, park and hope no one dings the car, pay $25-$50 to go in (yes all dressed), bite the bullet for your refreshments and hope some nut isn’t there also bent on making a political statement. Oh yeah you still have to drive home with kids screaming in the back and fight with them to go to bed at a decent time.

There will be two delivery mechanisms for this entertainment – disc playback (more on this later) and streaming. While folks on both coasts of the U.S. and in a few countries around the globe enjoy the benefits of broadband, it isn’t ubiquitous!

According to a new Pew Internet Project report 49% of folks in the U.S. still have dial-up at home and 40% don’t have broadband at work or home. The numbers are almost as dismal in other industrial countries and the ROW? Don’t even ask!

Strategic Analytics projects it will be at least 2010 (Fig 2, 3) before we have “reasonably” widespread high-speed connectivity in the U.S. The good news is that the competition will be fierce as cable/satellite, phone, powerline and “new” approaches work to become your content delivery mechanism. 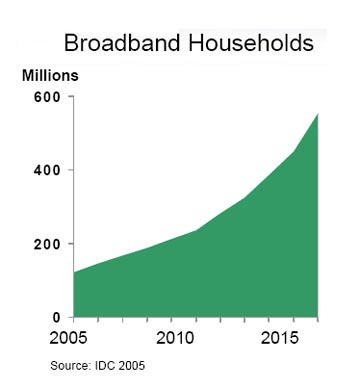 What we need is a home content management server (HD-based like ADS Tech’s new server drive kit – Fig 4), a write-once/rewritable disc-based library or combination of the two to watch, view, listen to what we want, when we want. 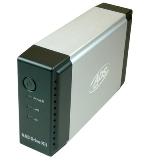 Much as video folks worry about “protecting” their assets, it is audio that will probably set the stage for tomorrow. Sure folks still buy CDs but if music downloads have shown us anything it has shown that even this model is broken. You buy a disc but you really only “want” 2-4 of the songs. The rest are a waste of space, plastic and money.

P2P has become so popular (legal and illegal) because people want their choice. Most of the illegal “free” sites make you work at finding the song you want to download and enjoy (hey, they don’t make money so how do they invest?). But the micro-payment sites are a snap. Sign up, drop in your payment scheme, do a global search, pay for the song – a reasonable fee — and download your music. BAM!!! You are entertaining yourself.

Like the song we’re playing? Want us to “give” you a copy? Get serious!

Not every movie will be a download financial success. Not every song will go platinum. But the vast majority of people will pay – a reasonable fee — for their entertainment if the “industry” quits trying to beat their customers into submission. But they need to be continually reminded that digital content has value — it’s called education not legislation!