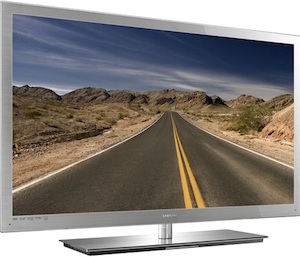 If you're thinking about buying an HDTV, now is a great time to get one. HD sets come in sizes from 5 inches to more than 100 inches and are priced to fit almost any budget — and that's all you need to know. Today, any HD set from a major manufacturer will display a wonderful HD picture. You can ignore almost every specification and all the geek speak. I promise you, you won't be able to tell the difference between a 1080p and a 720p picture when you get it home; especially if you are a cable television customer. Don't worry about refresh rate, pay no attention to the Energy Star rating, forget the contrast ratio — all of these specifications are for engineers and you can just ignore them.

What about LED vs. Plasma vs. LCD vs. DLP? 60 Hz, 120Hz? Also a non-issue for most people. You can tell the difference between these pictures when you see them side by side in the store, but hooked up to your cable set-top box, the differences will be imperceptible to all but the most sophisticated videophile eyes. (Several of you are going to argue this point with me, don't. If you think that you can tell the difference between any $2,000 HDTV set that is hooked up to a 6 MHz cable overstuffed with programming, you are just kidding yourself.)

Another important thing to think about is the number of inputs. Do you have a Blu-Ray Disc player? A video game console? Do you want to use your TV as a computer monitor? Make sure the set your thinking about has all the inputs you need.

Now, Thin is In! How thin? Maybe too thin. As you can imagine, thin is sexy … thin is cool and, thin is expensive. Just remember, you're probably going to hang this set on a wall. Do you really need the thinnest one in the store? If you do, you're in luck, because there are plenty to choose from. Make sure the one you buy can be mounted the way you want it mounted. Many of the super-thin sets cannot be mounted on an articulated arm because they bend under their own weight. Again, size and installation preferences will be hugely important when they come to install your 63" flatscreen in a space that can only fit a 60" set.

Internet connected TV's are all the rage. Do you really need one? You bet. In fact, I would not consider buying a television set this year that didn't include some kind of Internet connectivity. Most of the major manufacturers offer Internet-ready TVs. And, although it's early days, the sets give you all kinds of great benefits. You can watch videos from YouTube, rent movies directly from Netflix. And most sets have widgets built in for Facebook, Flickr and hundreds of other sites and services. Just remember, you need a good, high-speed broadband connection to fully enjoy Internet Connected TV. There's no point in getting an Internet-ready TV, if you're not Internet ready.

Can you blow off the Internet-connected TV and just use a Roku, Vudu, TiVo, AppleTV or GoogleTV box? Absolutely. Can you blow off all of the above a just run a cable from your laptop to your HDTV, yep! Will your significant other appreciate the ball of cables in the living room? Just asking.

There's a lot of talk about 3D and there are a few 3DTV sets available for this holiday season. Before you shell out some very big money for a 3DTV set consider the following. If you want a real 3D experience, you need a very big screen and that means very big bucks. The bigger the screen, the better the 3D. Should you buy one? There's not much 3D content available, but if you are willing to purchase a new Blu-Ray Disc player (players older than 2009 are not upgradable and not 3D compatible), or if you have a Sony PS3 Game Console (3D firmware upgrades are coming), you can get several Hollywood movies in Blu-Ray 3D.

You're also need 3D glasses for everyone who wants to watch. And, you're going to have to buy them. At the moment each manufacturer has their own standards for 3D glasses and they won't work with other sets — with one notable exception. While Samsung and Panasonic 3D glasses are not compatible, you can use your Samsung glasses to watch 3D on a Panasonic set, you just have to turn the glasses upside down. And that pretty much sums up the state of the 3DTV business.

All kidding aside, it's early days for 3DTV, but there may be a killer app … home movies! Both Sony and Panasonic are about to offer 3D cameras for stills and video and I can't think of anything cooler than watching your kid's school play or a high school sporting event in 3D. To say nothing of your regular home movies and digital stills.

If you're an early adopter … and you know who you are, you will certainly be the first kid on your block to own a 3DTV and we'll all come over to your house to watch the big game, so make sure you buy extra glasses!

And that's my quick HDTV overview. If you're ready to buy an HDTV, just do it. Samsung, LG, Panasonic, Sony, Mitsubishi, Vizio … pick one you like and bring it home!