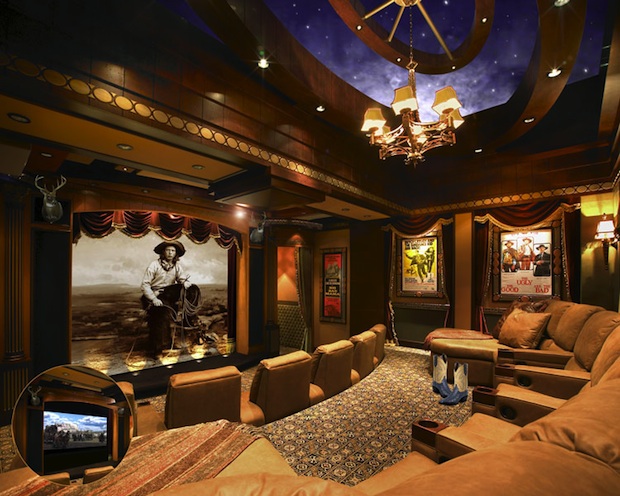 The fire screen and stage overdrape/cornice are fully automated. The stage draperies and those framing the movie posters are made of a high-nap, high-quality fire-rated commercial velvet in a deep shade of claret; each is accented with gold bouillon fringe. Footlights wash the mural's surface to create an aged sepia look. The custom woodworking surrounding the proscenium and throughout the ceiling is rusticated knotty pine; belt-buckle-look trim lines the connected series of ovals within the ceiling treatment.

A palatial estate in Jupiter, Florida, gives new meaning to the term Cowboy Chic with its rustic-looking home theater

Once upon a time, “ranch living” conjured up images of barnlike structures in a dusty, remote locale. Fast-forward to 2007, where a spectacular 20,000-square-foot home sited in Ranch Colony Estates dispels all preconceived notions of what a home on the range should be. 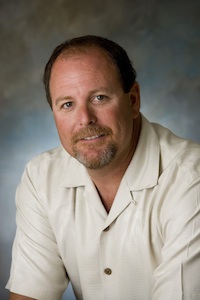 One of the many highlights of this home on the range–complete with lakefront views and elaborate man-made water features–is the custom home theater. “The owner wanted this to be a gift for his family,” says Don Dixon of Definitive Electronic Solutions in Jupiter, Fla., which also integrated the home’s lighting and security systems, and landscape lighting and music features. Unlike most theaters that progress with the design of the home, the homeowners waited to start building their home cinema. “The owner didn’t want the theater to distract from or delay from building the home,” says Dixon. About six weeks after the home’s completion, Dixon started the building the theater.

“The client always wanted a Krell Audio system and couldn’t wait to fire it up.”
–Don Dixon, custom installer

Dixon called Jeff Smith, president and owner of North Miami’s First Impressions Theme Theaters, an architectural and design company for private home cinemas, to provide interior design services. “We worked together on other projects, and I knew Jeff could deliver unparalleled quality and state-of-the-art design,” Dixon says, adding that they only had 120 days to complete the theater.

“Our objective was to create a seamless display of big picture, big sound, and a Wild West thematic statement within the home’s existing architectural style,” Smith says, adding that he also had to temper a masculine hunting-outdoorsy theme with a laid-back, casual feel. 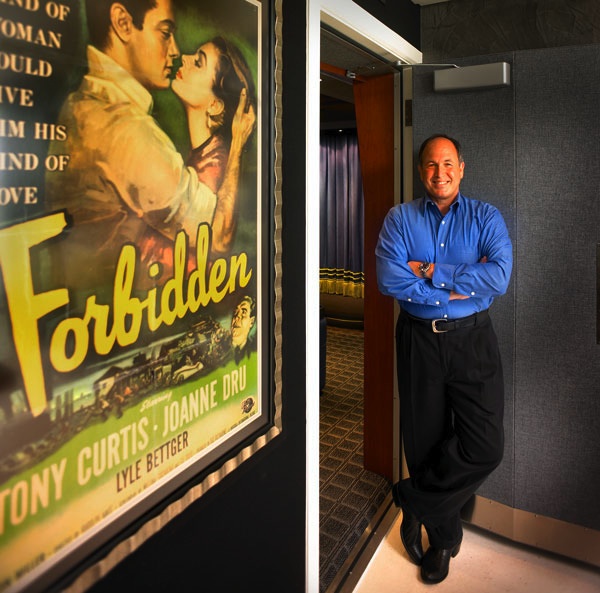 This theater is one of the largest theaters Smith and Dixon have designed, at 27 feet in length and 28 feet wide with dual-height 12- to 22-foot ceilings. It’s almost double the size of most home theaters, Smith says. For the rear upper ceiling, First Impressions used the aft portion of the ceiling for the Sky Dome, which features a dusk-to-dawn fiber-optic lighting scene, shooting-star constellations and a color fade system that morphs from sunrise to sunset. The ceiling’s centerpiece is an elliptical, wagon wheel-like soffit outfitted with special lighting effects for sunrises and sunsets.

“As the project progressed, the client said
it was like opening a Christmas present
every day.” –Jeffrey Smith, theater designer

The ample space provides ample seating for at least 14 adults via two rows of theater chairs that include a pair of day bed-configured CineLoungers that bookend the back row theater chairs. All are clad in full-hide Nubuck Suede in an antelope hue, and are outfitted with hand-hewn beverage holders. “Using full hides gives a real ranch-like feel,” Smith says. “It really worked with the whole genre of what we’re trying to create.”

Enter the theater through vestibules on either side of the Stewart Firehawk 123-inch diagonal projection screen, which works in tandem with the Digital Projection three-chip DLP projector. “The owner wanted a really large screen, but we were somewhat confined by the room’s configuration and the location of entry doors on each side of the screen,” Dixon says. To accommodate the domed ceiling, a motorized projector lift drops down from the ceiling when the lights go black. 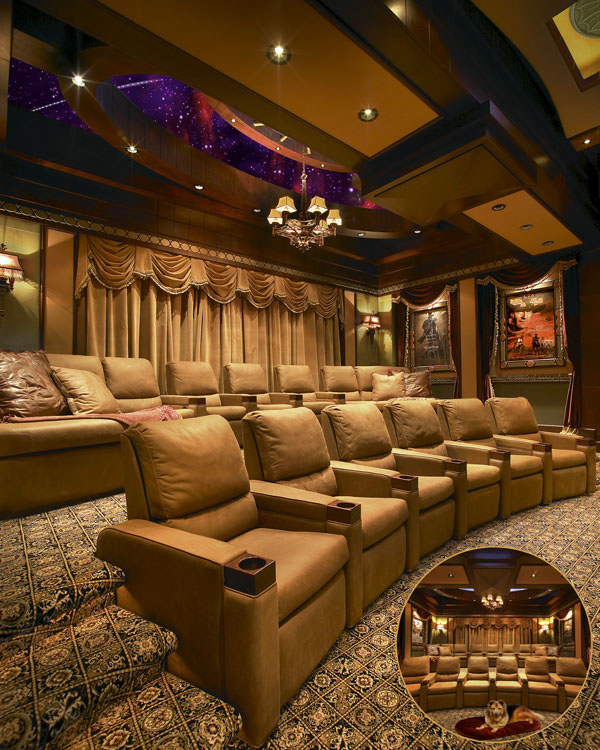 “One of the biggest challenges was the projector placement on a lift that falls between the lower-level and the upper-level ceiling,” Smith says, adding that the resolution was presented in the perimeter soffit, which defines the differing ceiling heights and conveniently keeps the projector and lift out of sight.

The large, free-standing left and right tower speakers by Krell are built into the architectural elements that flank the screen, and are capped with a deer head mount instead of a traditional capital. The Krell center speaker is angled upward for optimum listening, and subwoofers are tucked below the screen.

To meet the owners’ request for sound system concealment, Smith veiled the speakers behind acoustically transparent grill panels. Strategically placed LEDs spotlight the subwoofers and amplifiers when the sound system is in use. The result: the equipment “appears” when the house lights go down, giving the high-end gear a stage of its own.

A retracting fire screen that bears a turn-of-the-century cowboy photograph lends a touch of authenticity. First Impressions purchased the rights to the photograph of Billy Cramer, a professional bronco rider, from the Wyoming State Archives, and added sepia tones. “The fire screen was a nod to the days of Vaudeville when theaters had fire screens that protected the actors in case of fire,” Smith explains. “When the husband saw this image, he liked it so much he asked if we could purchase it for use in his home.”

“This is one theater that really sets the stage for entertainment,” Dixon says, adding that the owner can activate the theater from any touchpanel in the house. “You begin to hear the theme from The Good, The Bad, and The Ugly at low volume, then the fire screen comes down and the uplighting comes on and the ceiling goes from day to dusk. It’s quite an experience.”

The built-in Middle Atlantic equipment rack is tucked into the
vestibule to the left of the screen. A second vestibule at the
opposite end of the screen houses the Crestron lighting control
and Kalediscape DVD server; this area is glimpsed through
the open drape on the right side of the screen.

The owner’s criteria for this theater was straightforward: He wanted uncompromising performance at extremely high volumes, and he wanted the equipment to carry the Krell brand. Thankfully for installer Don Dixon, CEO of Definitive Electronic Solutions, the latter practically guaranteed the former.

Dixon selected Krell’s flagship LAT-1 and LAT-C loudspeakers for the front right, left, and center channels. Constructed of extruded aluminum up to 1.5 inches in thickness rather than the traditional wood or MDF, the LATs are incredibly inert, and resistant to the resonance problems that color the sound of most speakers. To power these massive speakers–the LAT-1s are more than 4.5 feet tall and weight 250 pounds each–Dixon employed three Krell Full Power Balanced 450Mcx monaural amplifiers. “Those are rated at 450 watts into 8 ohms, but the LAT-series speakers use a 4-ohm impedance,” Dixon explains. The ohm rating is a measure of how much impedance a component offers to a source of electrical current; halving the impedance draws twice the current–if the amp can deliver it. In other words, “that enables the amplifiers to deliver a whopping 900 watts to each front speaker.”

In the rear, Dixon didn’t have space for freestanding tower speakers. “We had to build the surrounds and rears into the columns, and most of Krell’s speakers–even the bookshelf speakers–were too deep. They would have really made the columns protrude into the room.” Luckily, the slim profile of Krell’s Resolution 4 on-wall loudspeaker fit perfectly within the design of the room. “Those speakers are also rated at 4 ohms,” Dixon says, “so when combined with a pair of Krell KAV-2250 two-channel amplifiers, which are rated at 250 watts per channel into 8 ohms, they’re running at 500 watts apiece.” That brings the power of the theater up to 4,700 watts–and that’s before subwoofers are added to the equation.

The system’s main subs, a pair of Krell Resolution Subwoofers, combined add another 1,400 watts of power. And if you know where to look–beneath two hidden access panels beneath the sofas in the back of the room–you’ll find another 2,000 watts worth of bass in the form of two James Loudspeaker Cinema 12 Subwoofers. By coupling these to the internal structure of the riser itself, Dixon created, for all intents and purposes, a big bass shaker. So why not rely on a purpose-built bass shaker, like a tactile transducer? “I’ve always had the sense of these tactile transducers as being fake,” Dixon says. “I think they’re gimmicky. There’s simply no replacement for the impact of a true subwoofer, and impact is what this theater is all about. It’s so powerful, so dynamic, with such fidelity that it will literally scare you.” —Dennis Burger 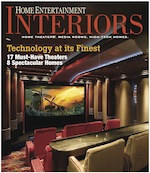