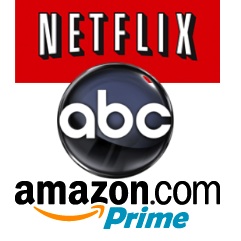 Netflix and Amazon each announced separate deals today with Disney-ABC Television Group to extend their licenses to continue streaming their TV shows.

The Netflix deal includes library episodes from ABC Studios, Disney Channel and ABC Family over the Internet. As part of the deal, Netflix is also adding new content to its lineup of Disney-ABC series and TV movies. In the U.S. episodes from new seasons of current Disney-ABC series will be made available to Netflix 30-days after the last episode of each season airs, which includes:

New content from Disney-ABC that will be added to the Netflix service include:

Popular Disney-ABC Television Group offerings for Prime members will include: