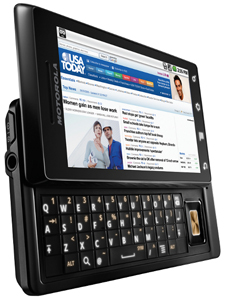 First, this is a real Motorola phone running on the Verizon network. It’s a great phone and a great speakerphone. The screen resolution is exceptional, web-browsing is really fast, search is great (obviously) and the free turn-by-turn GPS directions are awesome.

Like all smartphones with big screens, battery life is an issue. One big selling point for the Droid is that it can run five apps at a time. (The iPhone can only run one.) This sounds great, but five apps running will take a toll on battery life. One nice thing, unlike the iPhone, you can carry extra batteries for your Droid.

For me, the Droid’s keyboard is a serious disappointment. The keys are too far apart for quick touch-typing and, because they are flat, there’s not enough tactile feedback. I also really don’t like the integration with POP3, IMAP and exchange email servers. Syncing these accounts hourly would require you to carry several extra batteries. However, if you have a Gmail account, setting up this phone is as easy as entering your username and password.

On the whole, I like the Droid. It’s got a good camera, good video camera, good voice recorder, flawless integration with Google and Gmail and it’s a Motorola phone on the best wireless network, which means it’s a great phone. Would I buy one? I did. This Droid is replacing my BlackBerry Curve, which does a much better job with email, but simply can’t compete in the other areas.

To help you understand the benefits of the three most-talked-about smartphones, I’ve made a little chart.

The bottom line is simple. The Droid sits somewhere between the iPhone and a current-vintage BlackBerry (Curve, Tour, Bold, etc.) I say it’s not a BlackBerry killer because I don’t think businesses will gravitate to it immediately. RIM, the nice people who make the BlackBerry, have a pretty good lock on the business market. That being said, the Droid did kill my BlackBerry. I’m now carrying a 32GB iPhone 3GS and a Verizon Droid. I live in NYC and where I tend to spend most of my time, AT&T simply drops too many calls for me to use the iPhone as a phone.

As for my, now retired, BlackBerry Curve. I love it as an email device, but there’s more to life than email. For me, the Droid is a solid first effort and, so far, I’m in like!

Motorola Making the Cheap Smartphone Even Harder to Resist

AndroidGuys4 years ago
You Are Here