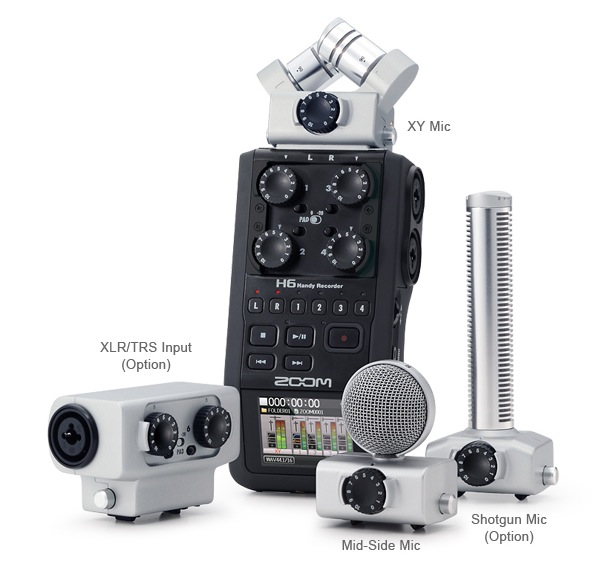 Zoom announced the all-new H6 Handy Recorder, the world’s first six-track portable audio recorder, which features a revolutionary system of interchangeable input capsules that can be swapped out as easily as the lenses of a camera. Four capsules are available: stereo X/Y and MS (Mid-Side), both included with the H6, and Shotgun and dual XLR/TRS combo capsules, available as options.

The H6 can be attached to a camera strap or mounted directly to a DSLR or camcorder, and its large full-color display makes it easy to view recording and playback levels even in low-light environments. It records directly to SD, SDHC and SDXC cards up to 128 gigabytes in a variety of MP3 and BWF-compliant WAV file formats, including 24-bit / 96k for the ultimate in high-definition audio. Four XLR/TRS combo jacks enable the connection of external microphones or line-level devices. Each input has its own dedicated gain control and pad switch, as well as phantom power in three different voltages.

Other features include a stereo Line Out for connection to camcorders; a headphone jack and built-in speaker; onboard effects, metronome and chromatic tuner; adjustable playback speed and pitch correction; and Pre-record, Auto-record and Backup-record functions. A USB port enables data transfer to and from audio editing software and allows the H6 to serve as a multichannel audio interface for computers and tablets.

“The H6 will provide users with a totally new level of performance and possibilities,” said Scott Hagen, Vice President of Sales and Strategic Planning for Zoom North America. “We believe it’s poised to become a legacy recorder that will stand the test of time.”