Yamaha, the innovator in home theater and digital audio and video reproduction, today unveiled the YSP-4000, YSP-3000 and the YSP-900 Digital Sound Projectors, each of which provides true multi-channel surround sound from a single component that can easily be installed underneath a flat-panel television. All of these units provide true surround sound performance by focusing audio signals into precisely controlled and directed “beams” that keep consumers from having to install numerous speakers throughout a room. Members of the press are invited to experience the new systems at CEDIA 2007 in Denver, Colorado, at Yamaha’s booth (#450), between September 5 and 9.

The YSP-4000 and YSP-3000 are fully XM Satellite Radio ready with XM HD surround sound powered by Neural Surround. An integrated FM tuner further broadens the user’s entertainment choices. The YSP-4000 and YSP-3000 also offer iPod compatibility via the optional YDS-10 dock. Once docked, the iPod can be operated (song selection, play, etc.) via the YSP’s remote control and on-screen display. Yamaha’s proprietary Compressed Music Enhancer technology compensates for the lost detail of audio that is compressed during the “ripping” process, recapturing the essence of the original recording.

All three models create a wider soundstage than previous Digital Sound Projectors, to fill the whole room with convincing surround sound regardless of where listeners are seated. The YSP-4000 and YSP-3000 offer two all-new modes: 5-Channel Stereo and My Surround. To accommodate even the most difficult installation environments where walls may not be present or are covered with unsuitable materials, My Surround mode provides surround sound without needing to reflect the beams off walls.

Each model offers additional sound settings, including 5-Beam Mode, 3-Beam Mode, Stereo+3-Beam Mode, Stereo Mode and My Beam Mode, which allows users to focus sound to a specific position in the room to avoid disturbing others. Yamaha’s proprietary IntelliBeam™ automated system calibration enables users to quickly and easily set up each system for the optimal listening experience and intuitive, multi-language on-screen displays.

All three of the new models feature SRS TruBass technology to provide exceptionally deep and rich bass response, and a subwoofer output to accommodate one of Yamaha’s new slim design subwoofers (YST-FSW150 and YST-FSW50) for clean, rich bass reproduction. 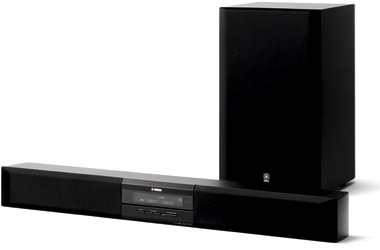 An amplifier that resides in the subwoofer provides 35 watts to each of the front surround unit’s six built-in beam drivers, and has 100 watts on tap to power the sub’s direct-firing driver. Yamaha’s YST technology ensures deep bass by combining negative-impedance and consistent-current principles to drive the subwoofer cone with remarkably precise control.

Other highlights include iPod compatibility via the optional YDS-10 dock, one-touch CINEMA DSP selection, night listening mode and a built-in FM tuner. The YAS-70 is fully compatible with Dolby Digital, DTS and Dolby Pro Logic II to provide surround sound from all sources.

The YAS-70 will be available in October for a suggested retail price of $599.95. For wall-mounting applications, an optional 15-foot cable (YDS-CBL15) for the Yamaha YDS-10 iPod dock will also be available for $49.95 MSRP.