Burlington, Iowa, November 15, 2004. Winegard Company will introduce The SquareShooter SS-2000, at CES 2005, the next Innovation in their GETDTV/HDTv TM series of digital Antenna Platforms. The SS-2000 is a more powerful amplified version of the SquareShooter SS-1000, selected as an Honoree in the 2004 Innovations Design and Engineering Showcase. Now equipped with Winegard’s new digital preamp, the SS-2000, Winegard’s newest outdoor High-Band VHF/UHF Digital/Analog/HDTV Antenna System was specifically designed for digital reception of reflected signals, extending the SquareShooter range up to 40 or 50 miles away from the transmit source.

With the addition of this new digital preamp, it also to deliver more reception power to the very important metropolitan/urban market. This is the biggest segment of the HDTV market and was not currently being served well by existing digital antennas until the release of the SquareShooter SS-1000.

Bob Howell, Director, Distribution Systems/Off-Air Antenna Business Group at Winegard said,
“Winegard anticipated it was imperative that any new digital antenna platform design specifically deal with this reflected signal or multi-path issue and we addressed this last year when Winegard introduced our SquareShooter SS-1000, which has become our best-selling antenna. The single largest contributing factor to successful digital antenna installation and DTV/HDTV reception today still remains the ability of the metropolitan/suburban consumer to buy an antenna that deals with multi-path or reflected signal. This is a huge issue and significant challenge for digital antenna manufactures and professional installers.”

The Multi-path problem is most important to metropolitan/suburban consumer locations where line-of-sight to the transmit tower is blocked and the only signal they can receive comes from a bounced signal, such as off a building. Multi-path is a result of several different broadcast signals reaching the antenna out-of-phase with each other or at differing time intervals. This creates a digital multi-path condition that delivers several sets of digital data (1’s and 0’s) to the ATSC chipset out-of-phase and can confuse proper decoding. The ATSC chipset is simply not sure which set of digital data is the correct data bits to decode. If the amount of multi-path is too high, the ATSC chipset will not decode any data at all. “It’s all about getting the best picture”, Howell continued, “Although only 16 inches square, The SquareShooter Series was specifically designed to receive and resonate VHF and UHF transmissions from reflected broadcast signals by allowing the antenna to be pointed at another reflective source to capture the reflected signals and still be able to resonate quality DTV/HDTV signals.”

Winegard’s SquareShooter Series incorporates both Russian and US Military technologies. From the US military, they used the sinuous element design similar to those found in missile guidance control systems and from Russia, the scatter plain technology that rejects reflected, out-of-phase signals and prevents them from arriving at the antenna element.

“To get more technical”, said Howell, “this Series of antennas uses a non-traditional electromagnetic antenna design which delivers superior performance. It has a 65-degree beam-width with demonstrable side-load performance, coupled with a VSWR of 1 to 1.3 and a very high 20-to-1 front to back ratio. The amplified SS-2000 has an input level of 350,000 mV and 12 dB flat gain across the entire bandpass specifically designed to assist the ATSC chipset with the correct digital decoding of digital broadcast transmissions. This technological break-through provides the SquareShooter Series its muscle to reject multi-path signals and the ability to tune into the desired reflected signal for the best reception characteristics so critical for downtown urban locations, allowing apartment and condominium dwellers, on the wrong side of the building from the transmit source, to now receive digital broadcasts”.

To GETOff-Air HD reception, customers need to buy and properly install the right Off-Air DTV/HDTV antenna. There is a huge need in this market for an outdoor antenna that successfully addresses these issues. The SharpShooterTM Series of outdoor High-Band VHF/UHF Digital/Analog/HDTV Antenna System are the only digital antenna platforms on the market today that can do it. As evidence of this, the introduction of the SquareShooter SS-1000 was the only time in Winegard’s 50-year history that a product was pre-sold before it was available; the SquareShooter SS-2000 is the second. This is a true testament to the need and acceptance of these unique and innovative new antenna platform designs.

If you’d like more information about this topic, or to schedule an interview with Bob Howell, please call Michael Sherman at 319-754-0604 or send an email to msher@winegard.com or visit www.winegard.com. 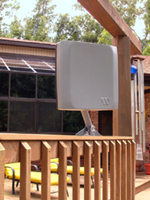 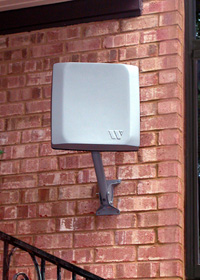