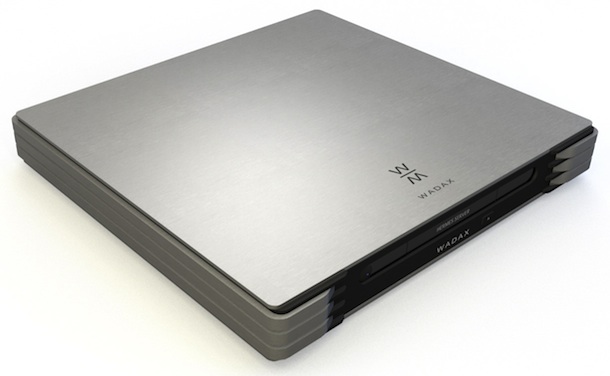 Wadax of Spain announced the Hermes ClearStream digital music streaming solution for audiophiles. It adds plug n’ play streaming playback to the Wadax PRE1 and PRE1 Mk II universal digital preamplifiers. This optimized product solution is comprised of three parts that can be added at anytime.

        The internal streaming module requests data from the external server, which is asynchronously clocked to the D/A master clock. A buffer stores data and sends it in bursts as required by the DAC. This topology cancels the timing issues in data transfer and is superior to all SPDIF connections. Jitter at less than 1ps and other audio data induced errors approach theoretical limits. This performance is only possible if the DAC and the streamer are within the same box as the master clock. Also, asynchronous transmission is ideal for networking.

The Hermes playback streamer combines digital file management with the D/A conversion stage. With this protocol, the best possible CD content for the PRE1 is the recording and playback streamer feeding the one box external server.

No “spinning disc” transport can improve this connection for sound quality. File formats are upgradable and include WAV, AIFF, FLAC, ALAC, WMA and MP3. Hermes can playback files from 32KHz to 192KHz, 16 to 32 bits. Note: 32 bits is only available when the source is the Wadax musIC chip. It can record at 96KHz and 24 to 128 bits. Note: 128 bits is only available when an analog input source is coded via the musIC chip.
        
  The Hermes Server is connected to the PRE1 via RJ45. Cat 6 or later is required. Music can be stored internally via solid-state drive or by connected NAS. Both are optional, POA. Up to 2 SSD drives can be connected in the bays at the back of the server. The integral CD drive rips bit perfect ‘read till right’ disks and requires Internet connection for automatic meta-tagging.

Additionally, the Hermes Server + control point, (an iPad 2 or later application) is uPnP-DLNA compatible and can be used with third party uPnP streamers’.