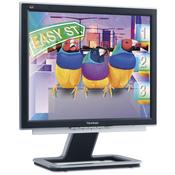 The VX922 is the first desktop display to combine ViewSonic’s proprietary Dynamic Structure™ and Amplified Impulse™ video response acceleration technologies to support rates of up to 500 frames per second across the entire color scale. This advancement produces superior front-of-screen performance for motion video and eliminates ghosting, a problem caused when the tiny pixels creating an image take too long to switch on and off.

“The faster response time of our new VX displays brings us one step closer to achieving CRT-like performance with all the benefits LCDs offer,” said Jeff Volpe, vice president, marketing, ViewSonic Americas. “We’ve made the much sought after ability to enjoy games and movies in the sleek flat panel form factor a reality.”

The VX922 will be available Dec. 1, 2005 through traditional ViewSonic resellers, distributors and mail order for an estimated street price of $429. For more information and images of the new displays, go to www.viewsonic.com/xtreme.

Audiophile tweaks are a hot button topic for people and we totally understand why. The IsoAcoustics ISO-Puck mini deliver what they promise.

Looking for the best sounding pair of earphones below $100? The 1More Triple Driver earphones deliver performance and long-term reliability.