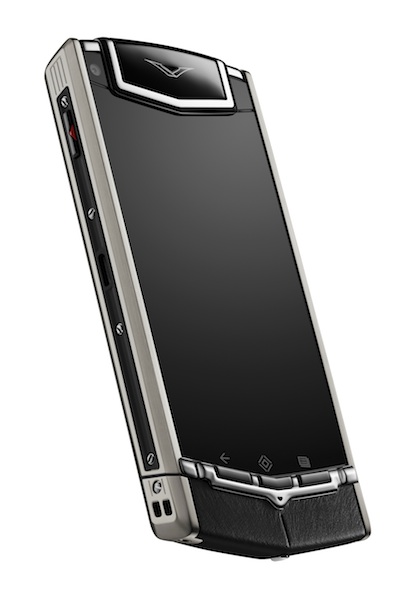 Vertu announced a handmade, luxury Android smartphone, VERTU TI,  available in titanium with leather, alligator skin or red gold for the select few who can afford (and want) a $10,000 to $22,000 mobile phone.  Those prices are not typos! The phone is based around a titanium case that has been used for its strength, elegance and low weight, with leather accents as well as the largest sapphire crystal screen ever engineered at 3.7 inches. The sapphire crystal renders the screen virtually scratch proof and it is tested to be four times stronger than other smartphones in terms of impact resistance. VERTU TI’s titanium case is around five times stronger than other smartphones, deforming less than 1mm when a 500NM force is applied.

The result is a phone that feels solid and beautifully crafted in the hand while offering unrivalled durability. VERTU TI combines distinctive Vertu design cues, such as the ceramic pillow and exposed watch screws, with a clean overall aesthetic, the result of which is a product that conveys a timeless elegance.

Another example of Vertu’s continued commitment to superior craftsmanship and engineering is VERTU TI’s audio ability. Its 11 x 15 mm rectangular drivers are acoustically integrated into the chassis to maximize frequency response and level. The result is an unrivalled symphonic sound from the phones own stereo speakers.

A new feature of VERTU TI is the Vertu key, which provides instant access to a curated world of benefits and services available via a global team of professionals available to customers wherever they may be, 24-hours a day, 7-days a week. These services include Vertu Certainty, which helps protect the device, its data and, where necessary, the customer. Vertu Life – tailored information, articles and benefits – sits alongside Vertu’s famous Concierge Service.

Massimiliano Pogliani, Vertu’s Global Chief Marketing and Communications Officer, said, “VERTU TI is the most rounded product that we have ever designed. The new Android platform and elegant physical presence combined with Vertu’s renowned curated benefits and services deliver a unique and exceptional proposition.”

Vertu’s Head of Global Design, Ignacio Germade said, “VERTU TI is a pivotal product for Vertu. It is where the timelessness of Vertu design meets contemporary technological elements. Long-standing Vertu customers will appreciate the style, the weight and the materials while those yet to experience Vertu products will engage with the clean, elegant lines, superior feel and contemporary operation.”

“As Vertu continues to grow, we will develop a design language that will satisfy the large number of our customers that appreciate classic simplicity of ranges such as Signature, while reaching out to new customers with hand crafted, elegant designs and technology that engages and inspires.”

Vertu President and CEO, Perry Oosting said, “VERTU TI is our most significant product for a decade. Android 4.0 delivers a proven and intuitive environment for users while the design and craftsmanship of the handset remains uniquely Vertu. Vertu has pioneered and led the luxury mobile phone sector since we began in the late 90s and the great depth of our knowledge and experience can be seen in VERTU TI. There is nothing else like it.”

VERTU TI now means that our customers can leave the house in the morning with just this phone in their pocket or bag without the need for any other device.”

Each VERTU TI is handmade in England by a single craftsman at Vertu’s state-of-the-art headquarters in Hampshire. It is then signed by that craftsman on completion of a rigorous testing and detailing process before being shipped to buyers via one of over 500 stores around the world.

Vertu is the pioneer and leading manufacturer of luxury mobile phones. Created to complement the discerning customer’s lifestyle, Vertu offers tailored, luxury services in combination with the finest in design, engineering and manufacture. Now with four distinct collections- Signature, Ascent, Constellation and Ti – Vertu uses innovative manufacturing techniques alongside traditional hand craftsmanship, assembling each phone at the company’s headquarters in England. Vertu is available in over 500 stores, including over 70 Vertu boutiques, in 66 countries worldwide.