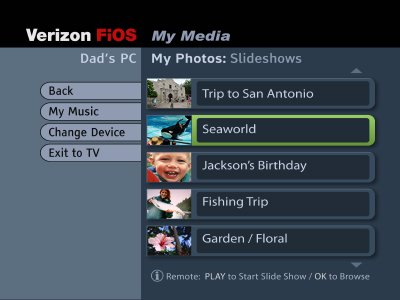 Record a Show Downstairs, Watch It Upstairs and Enjoy Photos and Music on the TV — all With Verizon’s Home Media DVR

Home Media DVR features a multi-room DVR that enables up to three simultaneous viewings of programs recorded by the device without requiring customers to set up a complex home network or buy extra equipment. The recorder is bundled with Media Manager, a new feature that lets customers easily access photos and music from their personal computer and play them on their entertainment center where they look and sound the best. Both functions are made possible by software and technology already built into the FiOS platform on Verizon’s fiber-to-the-premises network.

“Home Media DVR, with its combination of services, is one of the most powerful and convenient DVRs available,” said Marilyn O’Connell, Verizon senior vice president — video solutions. “It breaks through technology barriers and living room walls to let customers enjoy TV on their own terms throughout the home. It’s another way that Verizon innovation is changing the way customers watch TV.”

The launch of Home Media DVR follows the June 1 introduction of FiOS TV Widgets, a free interactive feature that lets subscribers display text-based local weather and traffic information on their TV screens. More information about both services is available at www.verizonfios.com/tv.

Watch DVR-Recorded Shows in any Room in the House

Verizon’s new multi-room DVR lets customers view recorded programs from any room in the house with a television and set-top box. In the multi-room DVR configuration, Verizon’s DVR set-top box (the Motorola QIP6416) functions as the media hub, which records and streams the video, and its standard-definition set-top boxes (the Motorola QIP2500) are the remote terminals. To watch recorded programs on the media hub and up to two remote terminals simultaneously, customers just pull down the menu, click “recorded TV” to find and select their program, and then press “play.” The media hub also functions as a dual-tuner DVR on which viewers can watch one program while recording another.

With Media Manager, family and friends can enjoy photos and music on their TVs rather than crowding around a computer to view them on a small screen. Verizon-developed Media Manager software automatically detects photos and music files on the PC and organizes them for presentation on the media hub TV. When customers want to show vacation photos, for example, they select “Media Manager” from the Enhanced TV menu and select the PC where the photos are stored. Customers can also play PC-based digital music files through their TVs and connected entertainment system. Music playback is being released as a beta application, with enhancements slated for release later this year.

‘The FiOS Difference’ in Home Entertainment

O’Connell said Home Media DVR is the latest example of “the FiOS difference,” which is changing the way people enjoy home entertainment ranging from watching TV, to purchasing and downloading movies on the PC, to playing the latest interactive, multiplayer online video games.

“We’ve deployed the best platform in the industry, from the core of our fiber-to-the-premises network right through the home to every device on the network. Now we’re adding cool new features that capitalize on the speed and interactivity that the FiOS platform makes possible,” O’Connell said. “Innovations like the Home Media DVR on the FiOS platform enable Verizon to deliver on the promise of digital media and convergence.”

Home Media DVR is $19.95 per month, only $7 more than the monthly fee for the FiOS TV DVR. Customers also need a $3.95-per-month standard-definition set-top box for each TV that will receive recorded video from the media hub.

Future releases of Home Media DVR will increase the number of set-top boxes that can simultaneously access recorded programs, provide playback of protected content, and permit playback of home videos stored on the PC.

FiOS TV provides a broad collection of all-digital programming, two dozen high-definition channels, up to 2,500 video-on-demand titles and more. It is delivered over Verizon’s fiber-to-the-premises network to communities in parts of seven states: California, Florida, Maryland, Massachusetts, New York, Virginia and Texas. Verizon is adding new cities and states to its FiOS TV network as it obtains local franchises giving it the legal authority to do so. Several independent studies have shown that cable companies respond with lower prices in markets where Verizon offers its highly competitive FiOS TV service.

Verizon Communications Inc. (NYSE:VZ), a Dow 30 company, is a leader in delivering broadband and other wireline and wireless communication innovations to mass market, business, government and wholesale customers. Verizon Wireless operates America’s most reliable wireless network, serving nearly 55 million customers nationwide. Verizon Business operates one of the most expansive wholly-owned global IP networks. Verizon Telecom is deploying the nation’s most advanced fiber-optic network to deliver the benefits of converged communications, information and entertainment services to customers. Based in New York, Verizon has a diverse workforce of more than 252,000 and generates annual consolidated operating revenues of approximately $90 billion. For more information, visit verizon.com.