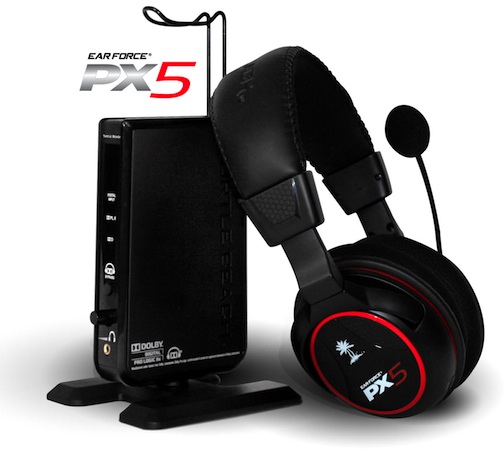 The PX5 is the most technologically-advanced headset ever designed for PS3 and XBOX 360 gaming, incorporating a programmable digital signal processor to allow independent customization of the chat, game and microphone signals. Custom settings stored in the headset as presets can be selected during specific parts of the game to emphasize sounds like footsteps or reloads that might otherwise be difficult to hear. It can even be programmed to disguise a gamer's voice or to enhance the voices of online players to be heard when the game gets louder. These personalized presets will be possible with software available from the Turtle Beach web site that allows the user to adjust the settings on a PC and transfer them via a USB connection to the headset.

The PX5 is also the first headset to incorporate dual radios–one for immersive, Dolby Digital surround sound game audio and a second for chat on the PlayStation Network via Bluetooth. The Bluetooth feature also supports stereo audio streaming for listening to music while playing a game and can accept a phone call while wearing the headset.

“Turtle Beach has always been recognized for technological innovation. We pioneered the console gaming headset industry by launching the first stereo XBOX headset, were the first with wireless gaming headsets and the first with innovative features to enhance the gaming experience, like Chat Boost. With the introduction of the programmable PX5, we're poised to again revolutionize the gaming headset market.” says Carmine Bonanno, President and CEO. “By allowing gamers to customize their audio environment, the PX5 gives them an opportunity to take charge of their console gaming experience in ways that have never before been available.”