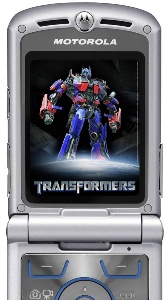 Glu Mobile Inc. (Nasdaq:GLUU), a leading global publisher of mobile games, today announced it has unleashed the mobile game and personalization content based on the much-anticipated July 4, 2007 movie release of the live-action TRANSFORMERS film from DreamWorks Pictures and Paramount Pictures, in association with Hasbro, Inc. (NYSE:HAS). The launch is the first release from the licensing agreement between Glu and HPG, Hasbro’s licensing division, to bring the TRANSFORMERS brand and characters upon the fast-growing mobile gaming market.

“As buzz builds for the upcoming film, we’re excited to bring the first-ever TRANSFORMERS mobile game and content to fans around the world,” said Jill Braff, GM of the Americas and SVP of worldwide marketing for Glu Mobile. “TRANSFORMERS is loved by millions of people worldwide, and the TRANSFORMERS game delivers the high-quality gameplay, style and excitement that fans expect.”

The TRANSFORMERS mobile game and personalization content is now launching throughout North and South America, Europe and Asia. In total, Glu will deploy more than 20,000 SKUs to launch TRANSFORMERS content, which will be available through more than 150 carriers and distribution partners in 65 countries around the world.

“Glu has truly captured the essence of the TRANSFORMERS property,” said Jane Ritson-Parsons, President of HPG. “Through their expertise and mobile platform, we can deliver entertainment that is relevant for fans of all ages and delivers on the TRANSFORMERS promise of MORE THAN MEETS THE EYE.”

In addition to the game, fans can customize their phones to TRANSFORMERS, choosing from more than 30 wallpapers, seven screensavers and 15 voicetones featuring the voice of Peter Cullen, the actor who plays OPTIMUS PRIME in the film. Voicetones allow fans to customize their ringtone to have OPTIMUS PRIME saying “MEGATRON must be stopped no matter the cost!” or “This is OPTIMUS PRIME – do you read me?”

The TRANSFORMERS game is the first-ever mobile game based on Hasbro’s globally popular brand which has grossed more than $3.1 billion in sales since its introduction in 1984. The TRANSFORMERS moviefrom DreamWorks Pictures and Paramount Pictures, is directed by Michael Bay from screenwriters John Rogers, Alex Kurtzman and Roberto Orci. Lorenzo di Bonaventura, Tom DeSanto, Don Murphy, and Ian Bryce are producing the film, with Steven Spielberg and Hasbro’s Brian Goldner serving as executive producers.

The TRANSFORMERS mobile game challenges players to play as OPTIMUS PRIME to help the AUTOBOTS find the Allspark, a source of energy hidden on Earth. As players fight as OPTIMUS PRIME and convert from vehicle to robot and back again with special weapons, they battle the rivaled DECEPTICONS across 20 different levels, enlisting the help of other AUTOBOTS on the way.

About Glu Mobile
Glu (Nasdaq:GLUU) is a leading global publisher of mobile games. Its portfolio of top-rated games includes original titles Super K.O. Boxing!, Stranded and Brain Genius, and titles based on major brands from Atari, Harrah’s, Hasbro, Microsoft, PlayFirst, PopCap Games, SEGA and Sony. Founded in 2001, Glu is based in San Mateo, California and has offices in London, Hong Kong, France, Germany and Brazil. Consumers can find high quality, fresh entertainment created exclusively for their mobile phones wherever they see the ‘g’ character logo or at http://www.glu.com.

ABOUT HPG
HPG, Hasbro Inc.’s (NYSE:HAS) licensing team, translates one of the industry’s richest portfolios of brands into a world of fun and excitement for children and adults globally. Through a host of publishing, digital media, lifestyle and entertainment platforms, HPG is able to surround fans worldwide with consumer products that expand Hasbro’s core brands, such as TRANSFORMERS, LITTLEST PET SHOP, MY LITTLE PONY, MONOPOLY, G.I. JOE, TONKA and PLAYSKOOL.

About HASBRO
Hasbro (NYSE:HAS) is a worldwide leader in children’s and family leisure time entertainment products and services, including the design, manufacture and marketing of games and toys ranging from traditional to high-tech. Both internationally and in the U.S., its PLAYSKOOL, TONKA, MILTON BRADLEY, PARKER BROTHERS, TIGER and WIZARDS OF THE COAST brands and products provide the highest quality and most recognizable play experiences in the world.