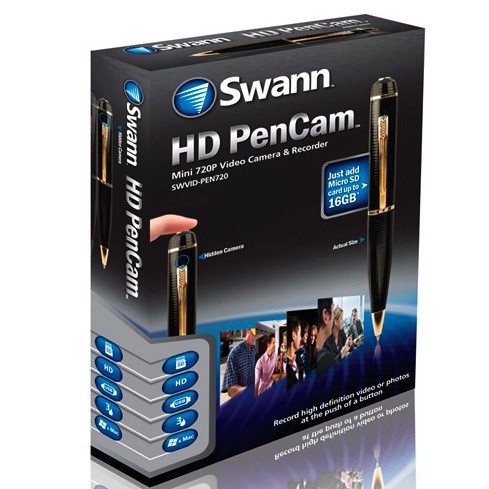 The HD PenCam accommodates up to a 16GB MicroSD card, while the PenCam 4GB has built-in internal storage. Both versions switch between video and photo mode with a touch of a button, feature date and time stamping, and are compatible with PCs and Macs.

HD PenCam
To view your video recordings or still images, transfer to a computer is made possible via a card reader or the included USB cable. The HD PenCam is powered by a rechargeable Lithium-ion battery that lasts 45 minutes on a full charge and recharges via a computer's USB port. Thanks to the flexibility of an additional 16GB MicroSD card, users can capture up to 8 hours of video or 72,000 still images.

PenCam 4GB
When you're ready to view your footage, simply unscrew the pen and the lower half contains a USB connector that plugs into a computer for easy back-up. Enjoy up to 90 minutes of usage per charge and recharge the built-in Lithium-ion battery via a computer's USB. With the 4GB built-in memory, users can capture approximately 2 hours of video or 18,000 still images.