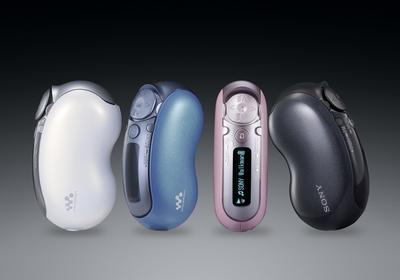 SAN DIEGO, Aug. 18, 2005 – Expanding on its line of Walkman digital music players, Sony Electronics today announced a new series of flash-based devices sure to be a feast for the ears as well as the eyes.

The new Walkman Bean models are available in 512 MB and 1 GB capacities with a built-in FM tuner. They also feature the long battery life, quick-charge function and brilliant displays people have come to expect from Sony Walkman digital audio players.

“These new players incorporate our most coveted features in a fresh design that’s unlike anything in the market today,” said Kelly Davis, senior product manager for portable audio at Sony Electronics. “They’re a playful and easy way to enjoy digital music; just looking at them makes you want to smile.”

The devices easily play back both MP3 and ATRAC3/3plus music files, in addition to supporting WMA and WAV formats. They are compatible with Sony’s Connect online music store and include SonicStage software to import, manage and transfer music collections.

The brilliant OEL (organic electroluminescence) display is light and bright, making it easy to view track and title information. To offer even greater utility, the display can easily change orientation to satisfy left-handed and right-handed music lovers alike. And a time/calendar function conveniently displays the time and date.

For added convenience, the players have a pop-up USB jack that connects directly to a PC for charging and transferring music. They provide up to 50 hours of continuous playback on a rechargeable battery and feature a quick-charge function that enables about three hours of playback on a time-saving, three-minute charge. In fact, an 80% charge can be obtained in about 45 minutes.