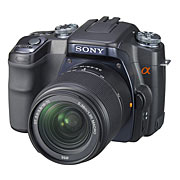 At the PMA2007 International Convention and trade Show which was held between March 8th and 11th in Las Vegas, Nevada, USA, Sony exhibited two prototypes of digital SLR camera bodies and interchangeable lenses currently under development. These products are planned to be launched in addition to the existing portfolio of the a100 camera body and the 21 interchangeable lenses including Carl Zeisslenses and more than 45 pieces of accessories.

“We need to further solidify our position in the digital SLR market. To do that, we must cater to varying degrees of customer requirements, and we are working on the second wave of products in order to expand the world of ‘a’,” said Toru Katsumoto, head of Sony’s AMC division responsible for digital SLR products, when speaking at Sony Electronics Inc.’s press conference. “Specifically, we are developing two new camera bodies targeted at higher market segments compared with the ‘a100’,” he added.

The extended line-up is expected to give customers more options and allows them to trade up products as their skills mature. The second wave of products also includes interchangeable lenses suitable for high-end enthusiast and professional use.

“With the added choice of camera bodies coupled with enlarged interchangeable lens portfolio, we believe ‘a’ helps our customers spur their creativity and putting it differently, ‘a’ unlocks the full potential of digital SLR,” Katsumoto concluded his speech.

One of the prototypes displayed at the PMA2007 was a camera body positioned higher than the current ‘a100’ to appeal to high amateur users. This new camera will deliver a high picture quality drawing on a new image sensor and new BIONZ image processing engine, both of which are currently under development. The new camera will also feature ‘Super SteadyShot inside.’ Already implemented in the ‘a100,’ this optical image stabilisation system is effective with the full range of ‘a’ system lenses.

The other camera body prototype will represent the flagship model of the ‘a’ range. Offering features that meet demanding requirements from even professional photographers, this highest-end camera body also incorporates a new image sensor, BIONZ processor as well as ‘Super SteadyShot inside.’ One of these two new cameras is scheduled for launch during this calendar year.