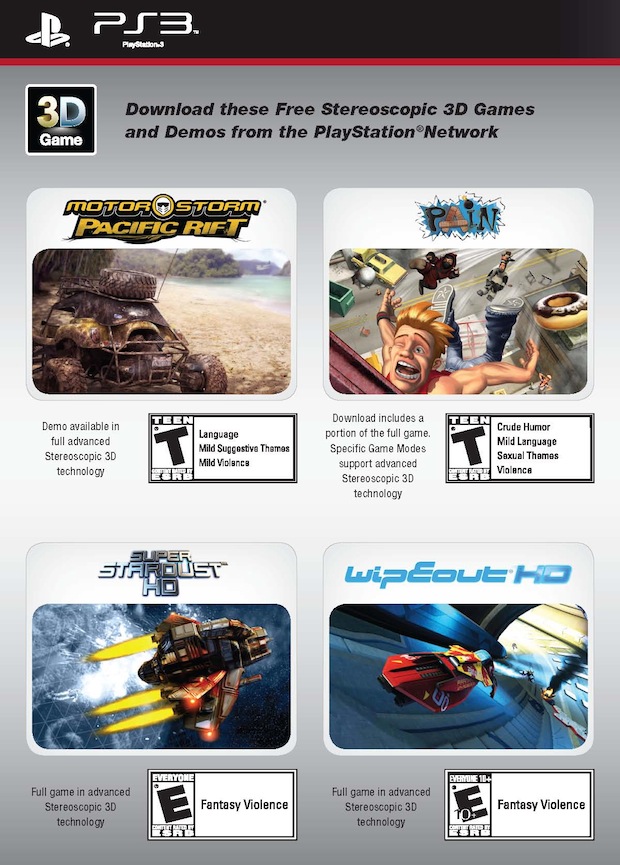 Sony Computer Entertainment America LLC (SCEA) announced at E3 that some of the company’s biggest titles will be available to consumers this year in stereoscopic 3D, including MLB 10 The Show, MotorStorm: Apocalypse, Killzone 3, The Sly Collection, and Gran Turismo5. Beloved franchises from our publishing community will also make their way into consumer homes in stereoscopic 3D on the PlayStation3 (PS3™) system, such as Crysis 2 from Electronic Arts, Mortal Kombat™ from Warner Brothers, Ubisoft’s Shaun White Skateboarding and TOM CLANCY™’S GHOST RECON: FUTURE SOLDIER™, as well as Disney Tron Evolution the Video Game, and 2K Sports’ NBA 2K11.

Unlike any other console on the market today, all 35.7 million PS3 units globally are capable of playing stereoscopic 3D games via a firmware update in April 2010. Four PS3 titles offering stereoscopic gaming experiences are currently available for download from the PlayStationNetwork (PSN) including PAIN, MotorStorm Pacific Rift, Super Stardust™ HD and WipEout HD.