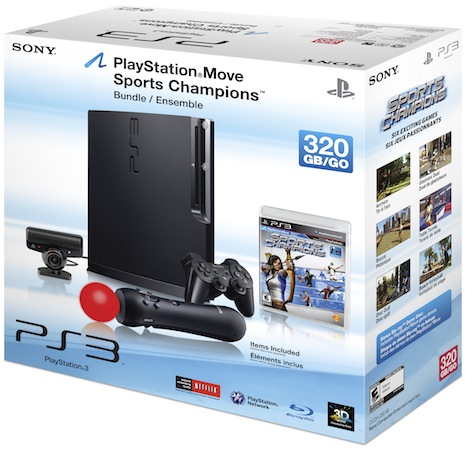 Sony announced the PlayStation®3 (PS3) system will be offered in North America with a 320GB Hard Disk Drives (HDD), offering more capacity to download games and entertainment content from PlayStation®Network along with personal digital content, such as music, photos, and videos. The new model will continue to offer the same advanced features and functions of the current models.

As part of the September 19 launch of PlayStation®Move, the new and innovative motion gaming experience that delivers precise, intuitive control, the PS3 Sports Champions Move bundle will introduce the 320GB model PS3 system along with one PlayStation®Move motion controller, PlayStation®Eye camera, a copy of Sports Champions, and bonus Blu-ray game demo disc all in one complete package for $399.99 (MSRP).

“With the launch of PlayStation Move just around the corner, we're expecting many new consumers to join the PlayStation® family. The PS3 Sports Champions Move bundle provides those families with everything they need to get into motion control gaming at a great value, with the 320GB model PS3 system as the centerpiece of the package.”
— Scott A. Steinberg, VP of Product Marketing

Big Picture Big Sound13 years ago
You Are Here