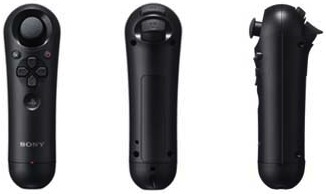 Sony Computer Entertainment (SCE) today announced that it will release PlayStationMove motion controller1 for the PlayStation3 (PS3™) system on September 15, 2010 in Europe/PAL territories and in Asian countries/regions2 at a recommended retail price (RRP) of euro 39.99. It will also become available in North America on September 19 at a RRP of $49.99 and in Japan on October 21 at a RRP of 3,980 yen (including tax). PlayStationMove navigation controller, one-handed controller to be used along with the motion controller for intuitive navigation of in-game characters and objects, will also become available on the same day in each region at a RRP of euro 29.99, US$29.99 and 2,980 yen (including tax), respectively.

On the software front, SCE Worldwide Studios will release more than 20 titles that are either dedicated to or supported with the PlayStation Move platform in fiscal year 2010 ending March 2011. Exciting and innovative software titles available in the launch window will include; Resident Evil 5 Gold Edition by CAPCOM Co., Ltd., Time Crises: Razing Storm by Bandai Namco Games Inc., Tiger Woods PGA Tour 11 by Electronic Arts Ltd, Lord of the Rings: Aragorn’s Quest by WB Games Inc, EyePet, Sports Champions, Kung Fu Rider by SCE and many more3. SCE, with support from third party developers and publishers, will continue to further enhance the software title line-up to offer high-definition motion-based gaming experience only available on the PS3 platform.

Through the introduction of PlayStation Move controllers, attractive software line-ups and peripherals, SCE will continue to further expand the PS3 platform and create a new world of computer entertainment that is only possible on PlayStation.

1 Users will need to use the PlayStation Eye camera to enjoy PlayStation Move motion controller on PS3.
2 Pricing of the motion controller in Asian countries/regions is equivalent to US$39.99. Pricing of the navigation controller is equivalent to US$29.99. The pricing will vary by countries or regions.
3 Title line-up and release date will differ by each region. Please refer to the separately attached software line-up list for further details.
Product Outline
4 New pricing for Europe/PAL territories will go effective concurrently with the launch of the motion controller.
5 Video capture and frame rate will differ according to the software used.