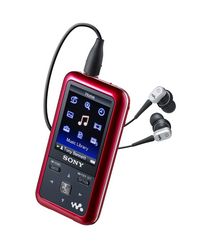 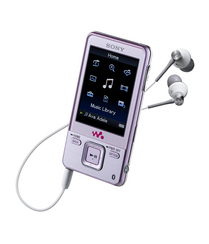 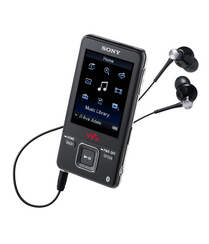 “Achieving the highest audio quality is one of our top priorities when designing our players,” said Steve Haber, senior vice president of the Digital Imaging and Audio Division at Sony Electronics.

Sony’s clear audio technologies are also included and significantly improve sound quality when playing back digital music files. They fill in the high tones that can be lost during file compression, enhance the bass, minimize distortion and maintain a consistent channel signal.

The devices have a standard user interface that makes it easy to enjoy songs, videos or pictures. For exceptional image quality, the video players have a large Quarter Video Graphics Array (QVGA) LCD screen that displays video at 30 frames per second. QVGA is a display mode for small screens in which the resolution is 320 pixels vertically by 240 pixels horizontally.

Integrated Noise-Canceling Walkman Players
For business travelers or families who want to keep the volume down and the audio quality high, Sony has created the NWZ-S710F series of noise canceling Walkman players.

These Walkman players have a built-in noise-canceling system that can reduce up to 75 percent of the ambient noise. Five clear audio technologies are built into the device to create sound clarity that maintains the same quality of the original source.

Because the system diminishes intrusive noise, listeners can avoid turning up the volume. Travelers can turn on the noise canceling feature and get peace and quiet even without listening to music.

The compact and lightweight NWZ-S710 players have a 1.8-inch QVGA (320 by 240 pixels) LCD screen (measured diagonally). They include an FM tuner with 30 presets that make it convenient to listen to the radio on the go.

With or Without Wires
The NWZ-A720 series has a bigger 2.4-inch QVGA (320 by 240 pixels) LCD screen (measured diagonally). Incorporating the design ethos of both the previous A and S Series Walkman players, these models have a slim body and a sleek industrial design.

With the same look and feature set as the NWZ-A720 series, the NWZ-A820 and NWZ-A820K series adds Bluetooth technology. This technology eliminates the inconvenience of wires while streaming tunes from the MP3 device to headphones or other devices with Bluetooth technology. It also makes it easier to listen to music virtually anywhere, anytime: in the living room, bedroom, office or even outdoors.

These Walkman players have a 2.4-inch QVGA (320 by 240 pixels) LCD screen (measured diagonally). For NWZ-A820 and NWZ-A820K series, users can manually delete videos directly from the devices’ internal memory without connecting to a PC.

For fitness enthusiasts, the NWZ-A820K Walkman player comes bundled with both the EX-series earbuds and the DR-BT21G Bluetooth wireless technology enabled headphones. With a wireless behind-the-neck style, the DR- BT21G stereo Bluetooth headset has built-in remote control features that play, pause and forward tracks. Fully charged, this headset offers hours of listening to music, watching videos or hands-free talking while connected to a compatible cell phone.

Consumers can check whether their Sony device is compatible by visiting www.sony.com/bluetoothstereo.

All of the new players are compatible with most subscription music services. The new players are Certified for Windows Vista, meaning they have passed a series of compatibility tests including Plays For Sure verification.

The NWZ-A820 and NWZ-A820K series of Walkman Bluetooth wireless technology enabled video players will initially be available in the following configurations:

Presales have begun for the new Walkman models online at www.sonystyle.com/walkman and at Sony Style stores. The players will be available in March across the country at military base exchanges and at authorized dealers nationwide.