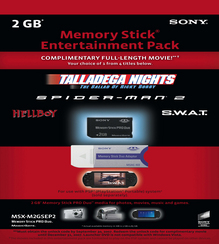 Sony is introducing another version of the 2GB Memory Stick Entertainment Pack for the PSP (PlayStationPortable) system. Available this month, the updated version of this product — MSX-M2GSEP2 — is bundled with an installer DVD loaded with the movies “Talladega Nights: The Ballad of Ricky Bobby,” “Spiderman 2,” “Hellboy” and “S.W.A.T.”

With the installer DVD loaded into a personal computer, you can use the complimentary unlock code in the package to select, unlock and transfer one of the four Sony movies optimized for PSP playback from the DVD to the Memory Stick media. Any movie transferred from the bundled DVD to the 2GB Memory Stick PRO Duo is viewable exclusively on the Sony PSP system.

The new Memory Stick Entertainment Packs will be available for about $60 online at sonystyle.com, across the country at Sony Style retail stores (www.sonystyle.com/retail), and at authorized dealers nationwide.