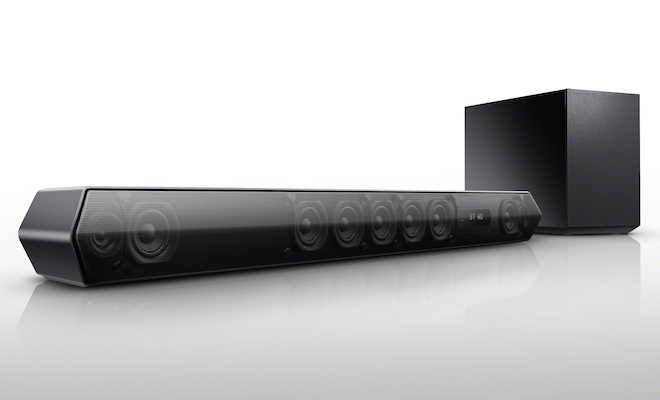 In addition to easy Bluetooth pairing and streaming, the HT-ST5 can also be controlled seamlessly over a Bluetooth connection with the SongPal mobile app from Sony. SongPal is a free, downloadable app for Android and iOS devices that provides an easy way to navigate and listen to content. SongPal conveniently integrates streaming services like Pandora and Spotify within a single user interface. Plus, it also allows users to completely control the sound bar, providing easy access to input source, volume and all other settings.

For those who prefer using a traditional remote, the HT-ST5 includes a compact, user-friendly remote that delivers total audio control while minimizing unnecessary buttons. In addition to easy access to frequently used functions like power, input source, and volume, there are also hidden buttons for important secondary functions that allow for fine tuning, such as subwoofer level volume.

With three HDMI 2.0 inputs, one HDMI 2.0 output with audio return channel (ARC), plus additional digital and analog inputs, the HT-ST5 makes connecting multiple HD devices seamless. The HDMI output provides a simple HD connection to TVs and with ARC built in, it supports audio playback directly from the TV.

Via the key-hole wall mounting system, the HT-ST5 can be easily mounted on any wall without the need for separate brackets or hardware. It can also sit conveniently on top of a TV stand or tabletop and the included “feet” position the bar at a 30 degree angle so that sound is directed slightly upward, compensating for lower placement below the TV.

Price and Availability
The Sony HT-ST5 Soundbar with Wireless Subwoofer will be available September 23, 2014 for $999.99.

Buying a New TV – Cutting Through the Hype

Before you buy a 2021 4K TV this year, take a much deeper dive into what's available and worth buying.

Amazon Music Unlimited adds support for Sony 360 Reality Audio at no extra charge but there's a catch for some users.