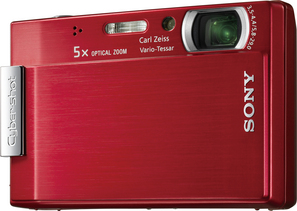 Sony is introducing a line of slim and stylish Cyber-shot T-series cameras that are destined to be the fashionista crowd’s favorite party companion.

The 8-megapixel DSC-T100 camera is a showstopper with the most powerful zoom and largest LCD screen in Sony’s T-series. With its Carl Zeiss 5x optical zoom lens and 3-inch LCD screen, this model will debut in red, black and silver.

The 8-megapixel DSC-T20 camera features a Carl Zeiss 3x optical zoom lens and a 2.5-inch LCD screen, and will hit the scene in pink, white, black and silver.

In colors to match your party gear and less than a half-inch thick, both cameras can easily slip into a clutch purse or the pocket of a jacket. They can be fashionably protected with four different styles of matching camera cases in colors such as pink, red, green, grey, creme, brown and black, which will be sold separately.

“There’s a generation of style-conscious, tech-savvy people who want the brands and products in their lives to reflect who they are,” said Phil Lubell, director of marketing for digital cameras at Sony Electronics. “Our new T-series cameras can give these customers the form factor and advanced technologies they’re looking for.”

When it comes to entertaining, the living room is the hub. Sony’s new T-series cameras feature high-definition output so you can bring your photos to the party and take full advantage of the HD equipment already in your home. Once you have viewed photos in the utmost clarity, color and detail on an HDTV set, there’s no going back to huddling around a PC. And tech-savvy snappers know that standard-definition equipment can’t display the full glory of even a 2-megapixel picture.

Sony’s new cameras have three accessory options for high-definition photo viewing. All are compatible with the Sony VMC-MHC1 HD component cable for simple connection to an HDTV set. They can also be connected to the new Sony CSS-HD1 high-definition Cyber-shot Station™ with a bundled component cable and a remote commander. Connect all your devices to the station just one time and it also works as a charger for the camera.

The complete high-definition photo viewing solution is the Sony DPP-FPHD1 package, which includes the high-definition component cable, a Cyber-shot cradle, a remote commander and a high-definition printer with component HD output. Designed to complement any living room, this new printer comes in elegant black and can be positioned horizontally or vertically. As you view your pictures, you can print the ones you want to hand out as party mementos, on the spot, in about 45 seconds.

All of the new cameras are equipped with a built-in slide show function. You can play back your images, complete with dynamic transitions choreographed to your choice of music clips.

The party people will look fabulous in every shot with Sony’s new face detection technology. It can identify up to eight faces in the camera’s LCD frame, and automatically adjust white balance and flash as well as focus and exposure for sharp, clear photos.

Shooting in low light doesn’t have to result in blurry, grainy photos. Sony’s Super Steady Shot optical image stabilization counters camera shake and stabilize images so you can easily shoot with longer exposure times. Armed with high light sensitivity (up to ISO 3200), you can also shoot at higher shutter speeds without using the cameras’ flash and spoiling the mood of the pictures. Sony’s Clear RAW ™ noise reduction technology will help reduce the picture noise common to low-light exposures.

Technology That Won’t Slow You Down

Slide their lens covers down and these cameras are ready to shoot in less than a second and prepared for the next shot in about a second. They’ll keep snapping for the duration of the party — on a full charge, up to 380 shots for the T100 camera and 340 shots for the T20 model.

You can edit PC-free with these cameras’ internal functions. Red-eye correction and dynamic range optimization to adjust under- or over-exposed areas can be performed without having to make a lot of adjustments to the camera. Photos can be retouched and enlivened on the spot with up to four filter selections, such as the fish-eye filter for an amusing fishbowl effect.

The T100 camera will ship in March for about $400, and the T20 will be available in April for about $330. Options will include batteries, travel chargers, lenses, filters, sports packs and cases. All models can be purchased online at sonystyle.com, at Sony Style retail stores (www.sonystyle.com/retail), and at authorized dealers nationwide. Pre-orders begin on February 28 at www.sonystyle.com/newcameras.