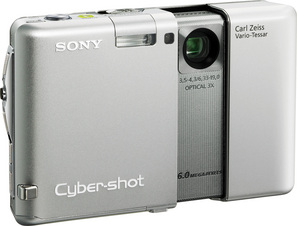 The G1 model is Sony’s first digital camera with the ability to send photos wirelessly to other Digital Living Network Alliance (DLNA)-enabled devices, such as another camera or a PC.

“This is a step towards realizing a platform for networked photo communication,” said Phil Lubell, director of marketing for digital cameras at Sony Electronics. “We will continue to explore the possibilities for networked digital imaging as broadband Internet becomes more pervasive in American homes.” 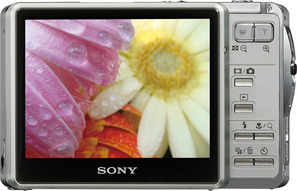 “Sony popularized the use of large LCD screens on compact cameras, with the understanding that simply passing the camera around is a means of sharing,” Lubell said.

The new models’ camera-to-camera wireless capability makes it possible to send your friends a photo at the push of a button. It’s also possible for up to four camera users to send each other photos in real time. With a DLNA-compatible PC, storing and sharing photos becomes simplified through wireless image transfer from the camera to the PC.

The G1 unit is the ideal vacation camera with 2GB of internal memory, saving you from having to manage extra media cards. It becomes a virtual photo album in your pocket as it can store up to 7,500 VGA-quality photos or 600 6-megapixel pictures. If additional storage is needed, the camera’s capacity can be expanded with an optional Memory Stick Duo™ media card or Memory Stick PRO Duo™ card, now available in capacities up to eight gigabytes.

In addition to storage capacity, it incorporates an auto image management system with sophisticated search functions. You can organize your photos by events, such as vacations or birthdays, and retrieve them later by keywords or labels. It’s also possible to select an image and search for other photos with the same face, same color, or a similar composition.

Armed with features for optimal shooting and sharing, the new model also integrates built-in technologies to minimize image blur, including Super Steady Shot optical image stabilization. It also has high light sensitivity, up to ISO 1000, to facilitate shooting at higher shutter speeds, as well as low-light conditions for more natural exposures or for settings where flash is not permitted.

This new Cyber-shot model also features a distinctive design. Its Carl Zeiss 3x optical zoom lens is wrapped in an elegant metal body. You slide the lens cover across, instead of down as with previous models, and you’re ready to shoot in less than a second.

The DSC-G1 digital camera will ship in April for about $600. Additional accessories will include lenses, filters, batteries, travel chargers, sports packs and cases. All can be purchased online at sonystyle.com, at Sony Style retail stores (www.sonystyle.com/retail), and at authorized dealers nationwide. Pre-orders begin on Feb. 28 at www.sonystyle.com/newcameras.