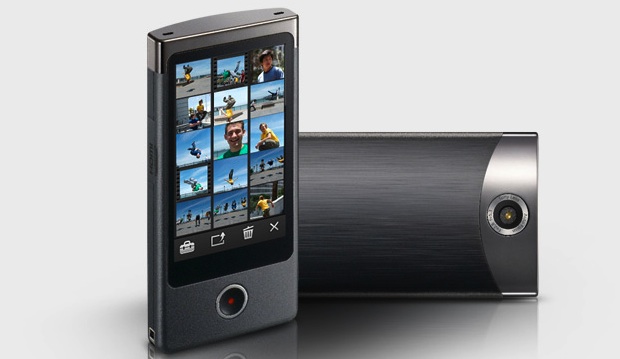 Boasting a clean, innovative design, new Bloggie Touch cameras feature minimal hard keys and a large, vibrant touch screen that automatically adjusts for vertical or horizontal shooting and viewing, enabling customers to shoot video right-handed, left-handed, right-side-up or even upside-down. You can record video, snap photos, or both at the same time, just by pressing two of three simplified buttons on the device. An advanced user interface features intuitive “touch and flick” recording control, search and playback operation, as well as a simple Share-it-Later function to tag the clips and pictures you want to post for easy upload when you are online.

The ultra-compact, lightweight cameras slip easily into a pocket or purse so they can record your favorite moments anytime, anywhere. The Bloggie Touch has SteadyShot® image stabilization for smoother footage, Face Detection technology to enhance faces by automatically correcting exposure and a built-in USB arm for easy charging and uploading to a computer. It even features an HDMI output to enjoy content on your HDTV.

Simple, Secure Way to Share Photos and Videos
After shooting, it's never been easier to share your favorite videos and photos on the web. By connecting the camera to an internet-connected compatible computer via the built-in USB, pre-installed Bloggie software quickly imports your content and makes it a breeze to edit, organize, and even transfer your videos and photos to popular sharing websites with simple drag and drop motions. It includes direct upload to Facebook®, Flickr®, Picasa Web Albums and YouTube photo and video sharing sites.

The built-in Bloggie software also connects to Sony's Personal Space online service that effortlessly shares your photos and videos privately with individuals you select. Personal Space service offers registered users the ability to create Sharing Groups by entering email addresses of friends and family. Once footage and images have been uploaded, the service sends an email invitation to those groups with a link to view content on your Personal Space service. It's easier, quicker and safer than sending big file attachments via email, and no registration is required by email recipients.

Price and Availability
The Bloggie Touch cameras, and a specially designed protective skin jacket, will be sold at Sony Style® retail stores and available in October in silver or black:

Trusted Reviews10 years ago
You Are Here