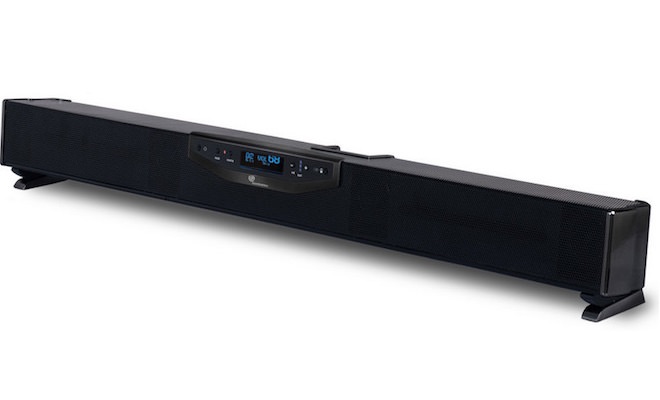 On display at the Home Entertainment Expo at the Grand Hyatt in New York City, SLIMstage40, by soundmatters, inc., features 170 Watts from eight internal amplifiers, yet it measures a scant 39″ (W) x 3.3″ (H) x 3.4″ (D). SLIMstage is slimmer than virtually all wall-mounted plasma and LCD TV’s, however it provides high-definition sonic output with several demonstrable benefits over other single-box surround consoles, including convincing, detailed surround sound from both stereo and 5.1 signals without reflecting walls, and deep, articulate bass without the need for an external subwoofer.

“Consumers who invest in a plasma or LCD TV want to replicate the complete theater experience, which includes high-performance, realistic surround audio,” commented Lee Adams, soundmatters’ Vice President of Sales and Marketing. “However, traditional high performance surround speaker systems not only cost as much, if not more than the TV, but are both complicated and take up lots of space, all of which runs counter to the benefit of getting the TV off the floor and on the wall in the first place.”

“Other single-cabinet surround systems typically require reflective walls to optimize a sonic image, but with SLIMstage, we’ve effectively removed this barrier by incorporating patented surround and speaker technologies that don’t rely on walls or subwoofers to produce a pinpoint surround-sound image. These new technologies also allowed us to develop a super-slim cabinet that nearly disappears when placed on furniture or under a flat-panel TV.”

SLIMstage40 features four Linear Magnetic Drive™ main/satellite speakers in its compact console, along with 170-watts of class-D amplification. Deep bass extension is achieved without an external subwoofer by way of nine bass drivers, including three down-firing Extreme-Energy™ subs assisted by six mass radiators, resulting in low frequencies that reach down to 45Hz.

EuphonyTMHD: An Epiphany for the Listener
Developed exclusively for SLIMstage through a joint effort initiated by Dr. Hareo Hamada, president of DiMAGIC, Inc. and soundmatters’ founder Dr. Godehard Guenther, EuphonyHD is a virtual surround technology that produces a well-developed virtual 5.1-channel virtual surround soundstage with a clear center channel image. From a single cabinet, EuphonyHD not only faithfully recreates DolbyDigital and DTS imaging, but it creates a realistic 5.1 soundfield from stereo signals as well.

SLIMstage40 is specifically tailored to complement flat panel TV’s measuring 37″ diagonally and larger. Along with the speaker driver array are several convenience features, including three digital audio inputs (two optical, one coax), three analog inputs (two on the rear panel plus one front iPod input), as well as a headphone output jack for private listening in virtual surround, thanks to the built-in Euphony technology.