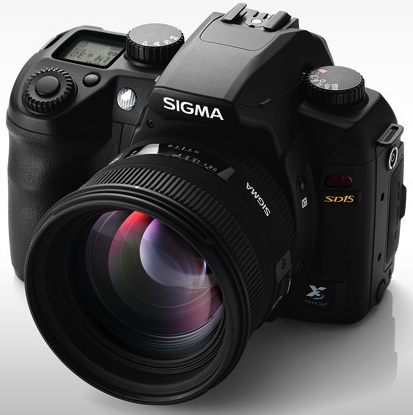 Sigma announced its SD15 digital SLR camera is now available in the United States for the estimated street price of $989.

The SD15 is the latest model in Sigma's SD series, which previously consisted of the SD9, SD10, and now includes the SD14. The DSLR has been developed to produce superior image quality with improved processing speed, operation and performance, and its 14-megapixel Foveon X3 direct image sensor can capture all primary RGB colors at each pixel location arranged in three layers. The SD15's “TRUE II” image processing engine helps the camera process a large amount of data, while producing high-resolution, high-definition images with impressive three-dimensional detail and rich gradation.

In addition to the enhanced processing speed from the TRUE II engine, the SD15 adopts the SD card and incorporates a highly visible 3.0 inch LCD monitor with 460,000 pixels and greater pixel density, a new, 77-Segment AE sensor, an Analog Front End (AFE), and an extra ISO stop at 3200. The SD15's buffer is also larger than its predecessor's, allowing 21 raw images to be shot continuously, as opposed to six, and the camera has an improved user interface.

The Sigma SD15 comes with the company's new Sigma Photo Pro (SPP) 4.0 software, which features new, user-controlled noise sliders that allow for greater control over detail rendering in images taken at ISO 400 and higher, and special algorithms that were specifically developed for processing SD15 raw files. Like earlier versions of the software, SPP 4.0 also contains the X3 Fill Light function, which allows users to easily add light to shaded areas of an image, without overexposing highlighted areas.

In March of 2008, Sigma introduced a high-end compact digital camera, the DP1, which uses the same large image sensor as featured in Sigma's digital SLR cameras. That camera was soon followed by the DP2, DP1s, DP1x and DP2s. The DP and SD series have established a strong following from a wide range of amateur and professional photographers.

“Our plans for the SD15 were originally shared with the photo community at photokina in 2008 because we wanted our customers to know that we're committed to the SD camera system and our outstanding Foveon technology,” said Mark Amir-Hamzeh, general manager of Sigma Corporation of America. “It's been long-awaited, for sure, but it's worth the wait. We are really pleased with the image quality we're getting from this camera.”

About Sigma Corporation
For nearly 50 years, Sigma Corporation's expertise and innovation has driven the company's core philosophy of “knowledge, plus experience, plus imagination,” with an emphasis on producing high-quality, high-performance photographic technology at moderate prices. This family-owned organization is the largest, independent SLR lens manufacturer in the world, producing more than 50 lenses that are compatible with most manufacturers, including Sigma, Canon, Sony, Nikon, Olympus and Pentax. Sigma Corporation also produces digital SLR cameras and high-definition digital compact cameras. The company is headquartered in Japan, with offices strategically located throughout Europe, Asia and North America.