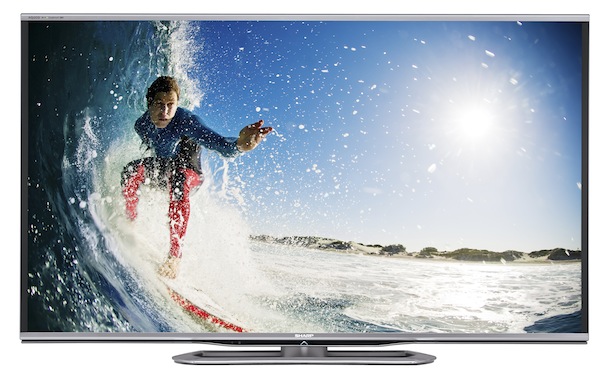 In the new AQUOS 8-Series, Sharp takes brightness to an entirely new level with the introduction of Super Bright which combines an intelligent contrast engine with a 50 percent higher brightness panel to create Sharp’s brightest picture with more contrast. The intelligent contrast engine constantly analyzes the signal and enhances the brightness of the bright objects on the screen while maintaining the black levels on the rest of the screen. The result is Sharp’s most brilliant, most contrasted picture ever. 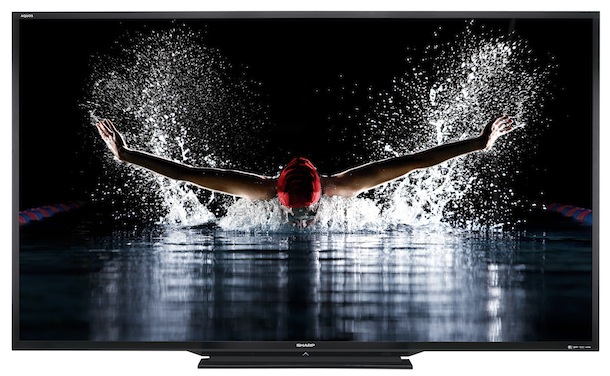 The World’s Largest LED TV
Introduced in June of 2012, and standing majestically at nearly 4 feet tall and spanning 6 feet and 7 inches wide, the 90″ (diagonal) AQUOS is the world’s largest LED TV and continues as part of the 2013 AQUOS lineup. Its picture quality is as stunning as its size, with crisp and clear content at the highest HD resolution of 1080p. Despite its size, the TV is relatively thin and light. Weighing only 141 pounds and less than 5 inches deep, the unit is easy to mount on a wall. And with LED technology, it is so energy efficient, it costs only $28 per year to operate.

Smart TV
All three large screen series (6-, 7-, 8-Series) in the 2013 AQUOS lineup will be smart, with a dual-core processor, Web browser and built-in Wi-Fi. Sharp’s SmartCentral platform provides an easy way for consumers to access virtually unlimited Web based content.

In the 2013 AQUOS lineup, SmartCentral will include an expanded selection of apps, Flash and HTML5 supported Web browsing and Android and iOS remote control operation. It will also feature Sharp Beam, a free app that enables users to send content from an iOS and Android smartphone or tablet to the big screen with a flick. A new SmartCentral feature gives consumers the ability to split screens for simultaneous TV viewing and Web browsing. Finally, Netflix subscribers will be able to search for content on their smartphone or tablet and then select to watch it on their AQUOS TV with Netflix “Second Screen” capability.

Striking Design
Sharp also brings a new innovative slim design to the 2013 AQUOS line of LED TVs. The screen bezel is astonishingly slim, so users can fit more TV in less space. The sides of the TV amazingly appear to fall away. And the whole display is sleek and thin, so customers can place or mount it practically anywhere.

Since the beautiful new designs are the perfect frames to turn a blank screen into a work of art, the new Wallpaper Mode will allow pre-installed artwork images or home photos from a USB drive on the AQUOS LED screen at a reduced light level that mirrors museum conditions, so the screen blends beautifully into a room’s décor with extremely low power consumption.

3D
Eleven of Sharp’s large screen AQUOS models feature full HD 1080p active 3D technology, delivering twice the resolution of passive 3D. New for 2013 is the use of Bluetooth 3D glasses that are not subject to interference.

Energy Efficiency
Most AQUOS LED TVs are ENERGY STAR 6.0 qualified. In addition, the Optical Picture (OPC) feature helps save power by using a sensor on the front of the TV to detect ambient room light, and automatically adjusts TV brightness for the best picture.