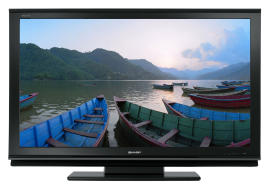 “The manufacturing techniques employed at the 8G Kameyama plant enable Sharp LCD engineers to build the most advanced large-screen flat-panel televisions in the world,” said Bob Scaglione, senior vice president and group manager, Product and Marketing Group, Sharp Electronics Corporation. “An example of our commitment to technological excellence is the Advanced Super View LCD which provides the highest contrast ratios in the industry.”

The D92 series and the LC-65D93U includes an unprecedented number of 1080p-compatible inputs including three HDMI and two component video inputs, each capable of passing through a 1080p signal. All three models in the D92 series and the LC-65D93U include a DVI-I connector that accepts a 1080p feed directly from a PC. The built-in RS-232C terminal enables integration with whole-house control systems, making this new model perfect for the high-end custom installation market.

Additional features include a 3D-Y/C digital comb filter to eliminate dot crawl and the moirA© effect, and Sharp’s OPC Power Save feature, which automatically adjusts luminance to room brightness and lighting conditions.