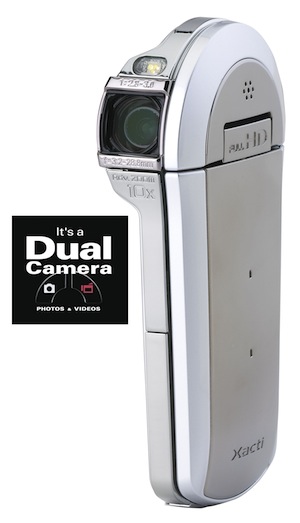 The Dual Camera series aims to provide customers with more enjoyable video experiences, by offering cameras that allow users to easily capture both photos and videos in daily life, rather than devices that are merely used to record important events. By utilizing a convenient video format that can be easily handled on PC and Internet environments, and even on home TVs, these cameras are more than just hardware for capturing, viewing, and saving images. They are convenient products for sharing videos online, on blogs or on other multi-media sites, and they are able to easily import images to portable media devices. The VPC-CS1 is undergoing certification to be compatible with iFrame, a next generation video format that has been designed to allow users to easily import, edit and share high quality video. SANYO is offering new ways to enjoy images after they are captured, and the Dual Cameras have been well received by consumers all over the world.

Now, SANYO has introduced a new model with a much greater degree of portability in a compact, lightweight and slim design, in order to expand the use of Full HD cameras. It is a new style of video camera that can record events and occasions as well as capture unforgettable scenes or single frames from daily life in Full HD, just as easily as taking a snapshot.

To enhance its versatility, the VPC-CS1 is undergoing official certification to support iFrame, a next generation video format that has been designed to allow users to easily import, edit and share high quality video. This format enables the camcorder function to record in the same format used for editing on a computer, dramatically speeding up the processes of importing, editing and sharing movies across multiple platforms and devices.

iFrame is a computer-friendly format, and can be used with both Mac and PC compatible applications due to the use of standards-based technologies such as H.264, AAC, and MP4.

When combined with iMovie in this capture mode, it is possible to realize even greater convenience in the procedure of capturing, uploading to a computer, editing, and sharing.