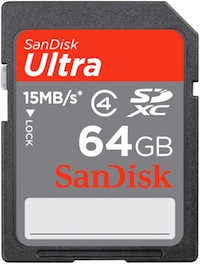 SanDisk just announced that it has begun shipping the 64 gigabyte (GB) SanDisk Ultra SDXC™ memory card, the company’s highest capacity SD™ card ever. With its 64GB capacity, up to 15MB/sec read speed and Class 4 speed rating, the new high-capacity SD card is ideal for capturing and storing massive 1080p High-Definition video files and then transferring them quickly to a computer.

Because the SD 3.0 specification was recently released, only a handful of devices may be immediately available that support SDXC cards. However, the pace of new camera model introduction supporting the SDXC format is accelerating. Canon announced at CES that all of its new VIXIA camcorder models and PowerShot cameras are compatible with SDXC cards. Widespread adoption of SDXC is expected to occur across a range of consumer electronic products including HDTVs, Blu-ray recorders/players, camcorders, cameras, mobile phones, navigation systems and computers. SanDisk ImageMate memory card readers are compatible with SDXC cards if the connected PC uses an operating system that supports exFAT.

The 64GB SanDisk Ultra SDXC card comes with a lifetime limited warranty. The new memory card is available immediately at sandisk.com via the U.S. e-commerce site with a price of $349.99, and will be available at SanDisk locations around the world soon after.