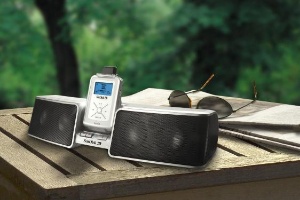 BERLIN, Sept. 2, 2005 – SanDisk Corporation (Nasdaq:SNDK) today introduced the Sansa™ Speaker Dock, a portable sound system that can play music from SanDisk’s Sansa digital audio players as well as content from other devices such as personal CD and DVD players and notebook computers. The announcement was made at IFA: The World Trade Fair for Information & Communications Technology, where SanDisk is exhibiting in Hall 1.1, Stand 230 in Messe Berlin.

Boasting high-quality stereo sound, the sleek-looking, one-piece system contains four full-range speakers and an amplifier with volume controls. It’s ready to use as soon as you slide a Sansa MP3 audio player into the recessed docking station and insert the attached connector cable into the player. Any source content on the Sansa, including FM radio stations, can be played through the speakers.

“Now that we have established SanDisk as a major supplier of flash-based MP3 players, we believe that offering quality, value-priced accessories adds to the versatility of the Sansa line, giving consumers more options to use their players,” said Wes Brewer, SanDisk’s vice president of retail product marketing. “Enhancements such as the Sansa Speaker Dock will help drive sales for the players and enable retailers to offer attractive packages with different combinations of players and accessories.”

The Sansa Speaker Dock can be used with either an A/C adapter or with four AA batteries(1), giving the unit total mobility. “Now you can play your favorite music on the Sansa player out loud anywhere,” said Matthijs Hutten, SanDisk retail product marketing manager for the Sansa accessory line. “The battery power option and its compact but high audio quality design makes it easy to move around.” When plugged into a wall outlet, the speaker dock powers the Sansa and saves the player’s battery.

Although the Sansa Speaker Dock is custom-fitted for the Sansa series players, it has a rear input and comes with a three-foot audio cable that can be used with a variety of electronics devices. These include other MP3 players, portable CD and DVD players, portable game consoles and handheld computers — essentially anything with a 3.5 mm stereo headphone output. Furthermore, the system can be hooked up to a PC — using the included USB cable — to transfer music and data to the Sansa player while connected to the Speaker Dock.

The four aluminum speakers are driven by powerful Neodymium magnets, giving the system a rich sound with clear fidelity. The exterior of the Sansa Speaker Dock consists of a glossy white shell with metallic gray trim. Dimensions are 37.4mm wide by 309mm long by 62.8mm high. Suggested retail price is $79.99, and units will be available in the coming weeks in the U.S. and in other countries where SanDisk Sansa players are sold.

The Sansa Speaker Dock is one of a new line of accessories designed for the SanDisk Sansa MP3/WMA players, which are available in two models — one with 512 megabytes (MB) and one with 1 gigabyte (GB)(2) of internal memory. The players also feature an SD™ flash memory card expansion slot and an FM radio with 20 presets.

SanDisk is the original inventor of flash storage cards and is the world’s largest supplier of flash data storage card products, using its patented, high-density flash memory and controller technology. SanDisk is headquartered in Sunnyvale, CA and has operations worldwide, with more than half its sales outside the U.S.

SanDisk’s product and executive images can be downloaded from http://www.sandisk.com/corporate/media.asp.

(1) Batteries are not included.