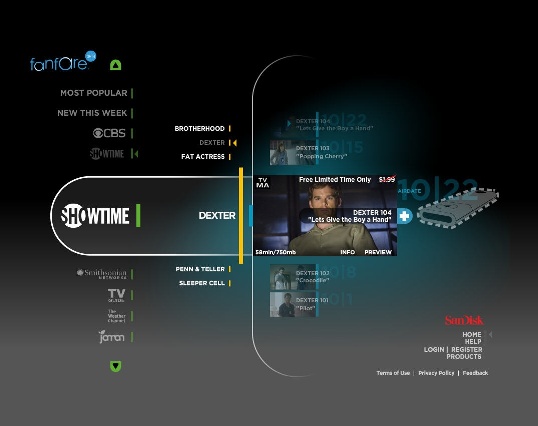 Fanfare is a Gateway to Content From CBS, Showtime Networks and More, Offering Consumers an Easy End-to-End Video Experience

SanDisk Corporation (NASDAQ: SNDK), a leading developer of portable audio/video players, today announced the public BETA version of Fanfare™, a dynamic Web-based service that enables consumers to download television shows, movies and other premium video content to portable devices. The BETA of the Fanfare content delivery service platform coincides with the U.S. online retail availability of the new Sansa TakeTV™ PC-to-TV video player (formerly “USBTV”). The combination of Fanfare with Sansa TakeTV creates an exceptional, end-to-end entertainment system enabling viewers to time-shift and place-shift their favorite shows by downloading them from their PC to watch them on nearly any TV, at any time.

“Fanfare is a very simple and affordable way to conveniently catch up on TV shows and watch other premium videos,” said Kate Purmal, senior vice president and general manager of digital content for SanDisk. “Pairing Fanfare’s content with a Sansa TakeTV player creates an unmatched, seamless solution where users can browse a rich array of TV programming and movies in a friendly Web interface, and then quickly and easily move this content to a TV, where it’s meant to be enjoyed.”

Fanfare video content is a combination of free (ad supported) and paid episodes. The company is in the process of adding new episodes from current partners to the catalog, and acquiring additional programs, other premium content and channels. More than 85 titles are available today, with dozens more expected to be added each week to grant consumers access to thousands of hours of television programming.

SanDisk chose to launch an early version of Fanfare to begin to expose people to the innovative concept of easily transferring content from the PC to the TV. Fanfare will gain additional features when the full version is launched early next year. In addition – while the paid content model is common for other video download services — SanDisk is working closely with its content partners to establish an advertising-supported model for current season television programming.

The overall vision of Fanfare is to enable users to draw from a rich catalog of free and paid video content from a single location for playback on a wide variety of portable devices in the future. These devices will consist of SanDisk’s line of Sansa audio/video players, as well as mobile phones, hand-held computers and TVs. Future plans also include video being transferred via SanDisk mobile cards.

Added Purmal: “Video downloading – particularly television — is in its infancy, and standards and business models are still emerging. SanDisk saw an opportunity to create a new solution that meets consumers’ needs for a seamless user experience to access and play back television and other video content on our video-enabled products. We’re excited to bring this innovative service to consumers.”

“In testing conducted for SanDisk at our Television City research facility in Las Vegas, we found consumers were very receptive to the concept of capturing television programming through the Internet and then watching it on their TVs,” said David Poltrack, president, CBS Vision and executive vice president and chief research officer, CBS Corporation. “To that end, we’re pleased to add Fanfare to our growing list of distribution partners for the CBS Audience Network.”

Fanfare is built around an intuitive, easy-to-navigate user interface designed by Schematic, an award-winning interactive agency specializing in innovative digital platforms. With a single click, programs and movies can be downloaded directly to the Sansa TakeTV player, which is then inserted into a small cradle attached to the TV for playback on the television. The cover of the Sansa TakeTV unit serves as a remote control.

Rights-managed content is protected with TrustedFlash™, a security technology developed by SanDisk that securely stores sensitive digital data and applications on flash media.

The Sansa TakeTV device must be purchased to extract content from Fanfare and transfer it to a television for playback.

The Fanfare public BETA is currently intended for the U.S. audience. To learn more about Fanfare or to access content for use with a Sansa TakeTV video player, visit http://www.fanfare.com.

SanDisk is the original inventor of flash storage cards and is the world’s largest supplier of flash data storage card products, using its patented, high-density flash memory and controller technology. The Company has been the second largest manufacturer of MP3 players in the United States since November 2005. SanDisk is headquartered in Milpitas, Calif., and has operations worldwide, with more than half its sales outside the U.S.