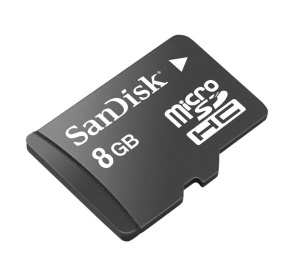 SanDisk Corporation (NASDAQ:SNDK) today announced that it is has begun sampling 6- and 8-gigabyte (GB)(1) microSD™ High Capacity (microSDHC™) flash memory cards to major phone manufacturers and mobile network operators (MNOs) for testing and evaluation. The new cards are ideal for the growing number of feature-rich multimedia handsets that bring together phones, music players, hand-held computers, digital cameras and more. An 8GB microSDHC card can store more than 2,000 digital songs, or more than 5,000 high-resolution pictures, or up to 5 hours of high-quality MPEG 4 video(2).

Retail release of the cards and availability to phone manufacturers and network operators are planned for later in 2007. Pricing has not yet been determined.

“With these new cards, any mobile phone with a compatible microSDHC slot will have just as much storage as the largest-capacity iPhone,” said Jeff Kost, vice president and general manager of the Mobile Consumer Solutions division at SanDisk. “What’s more, removable cards make it easy to share content you create with friends, ‘sideload’ files from a computer, and add more storage simply by purchasing more cards. By offering capacities of 6GB and 8GB, SanDisk is poised to enable people to enjoy more photos, more map data for navigation, more videos, more games and more music, wherever they go, on any phone with a compatible microSDHC slot.”

SDHC is the designation for any SD™ or SD-based card that is larger than 2GB and adheres to the new SD 2.00 specification required for cards and hosts to support 4GB to 32GB capacities. The specification was developed by the SD Association, an industry standards board, which has also created three classes to define minimum sustained data transfer speed. These cards adhere to the SD Speed Class 4 Rating.(3)

SanDisk is the original inventor of flash storage cards and is the world’s largest supplier of flash data storage card products, using its patented, high-density flash memory and controller technology. SanDisk is headquartered in Milpitas, Calif., and has operations worldwide, with more than half its sales outside the U.S.

(3) Based on SanDisk internal testing.